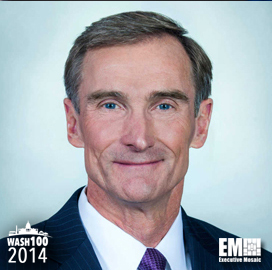 Executive Mosaic is honored to introduce Roger Krone, president of Boeing Network and Space Systems, as the newest inductee into the Wash100, the premier group of leaders who drive innovation and growth at the intersection of the public and private sectors.

Krone joined Boeing through its 1997 merger with McDonnell Douglas, where he served as vice president and treasurer and oversaw all financial planning, treasury operations and investor relations, among other areas.

He elevated to his current position in 2008, which brought him to Washington after leading Boeing’s Army Systems division as vice president and general manager.

He also spent time at Boeing’s Chicago headquarters in positions including vice president of strategic programs, one of several executive business management and finance positions across the company’s military, aircraft and missile systems operations. The move to the Capitol region “helped me to better understand the context and environment of our customers and of industry,” Krone told GovCon Exec, adding that he had to “take what I learned about management and leadership and apply it to a new kind of business.

“That required being more versatile, more agile and learning a new customer set.”

Krone said the needs of that customer set have continually evolved since he assumed the role, with customers increasing “requirements on industry to demonstrate leadership in innovation and value.”

He has accordingly devoted significant effort toward “empowering people” through talent management and developing strategy to “help drive growth and operations.”

“Every competition is strategic now, with cost and performance as differentiators… we have focused our business around capabilities to better meet our customers’ needs,” Krone noted. Krone said Boeing’s Cyber Engagement Center, which opened in October 2011, continues to grow and develop into the kind of center where this focus can be honed.

“It’s become a destination for a variety of customers, partners and pieces of Boeing and it has helped us to better understand what cyber means and how we can offer better solutions,” he said.

He is also excited about the capabilities of Boeing’s 702-SP all-electric Satellite, which debuted in 2012, and is looking forward to the first launch of the company’s Crew Space Transportation-100 capsule in 2016, a next step in the company’s efforts in conjunction with NASA to reinstate American transportation of astronauts to the International Space Station.

That is in advance of the first launch of the Space Launch System in 2017, “which will reach beyond the ISS to places like the moon and Mars eventually.”

“The possibilities for what we can do in space are limitless, and we’ve got some amazing things in the works,” Krone said. Krone currently serves as chairman of the board of directors of the United Launch Alliance, a 50-50 joint venture between Boeing and Lockheed Martin that helps carry weather, telecommunications and national security satellites to space and employs more rocket scientists than any other company in the world.

A graduate of Harvard Graduate School of Business, he previously earned undergraduate and graduate degrees in aerospace engineering from the George Institute of Technology and the University of Texas at Arlington, respectively.

He is an Associate Fellow of the American Institute of Aeronautics and serves on the boards of the Greater Washington chapter of the Urban League and WETA Public Television and Radio, in addition to the advisory board of Georgia Tech.