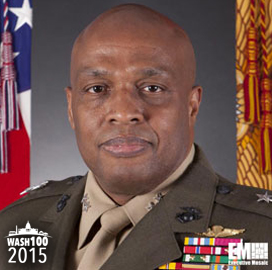 Executive Mosaic is honored to introduce U.S. Marine Corps Lt. Gen. Vincent Stewart, director of the Defense Intelligence Agency, as the newest inductee into the Wash100 — a group of influential leaders in the government contracting arena.

Stewart assumed the role of DIA director in January and became both the first Marine and first African American to hold the position.

The three-decade military veteran oversees an agency that manages military intelligence in support of warfighting, force planning and policy-making.

“We must continue to meet new threats on the battlefield… and establish even better ways to outmaneuver our adversaries,” he said during his January swearing-in ceremony.

He has commanded tours in domestic and international locations and held principal staff assignments on project management, signals intelligence, C3I and intelligence policy across the Defense Department.

Executive Mosaic congratulates Lt. Gen. Vincent Stewart and the DIA team for their selection to receive this award.