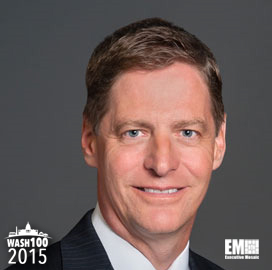 Executive Mosaic is honored to unveil Lou Von Thaer, president of the national security sector at Leidos, as the newest inductee into the Wash100 — a group of influential leaders in the government contracting arena.

Von Thaer led General Dynamics advanced information systems business as president for eight years before he joined Leidos in June 2013, when it was still known as Science Applications International Corp.

In a January 2014 conversation with ExecutiveBiz, Von Thaer discussed his then-new company’s transition to become Leidos and how government and commercial organizations have sought to get a better grasp of cybersecurity.

“People are starting to wonder why after all this time and all this hard work, we still find most of our cyber attacks through defensive means after attacks have entered our networks, by recognizing signatures that we’ve seen before.”

Von Thaer is also a veteran of Lucent Technologies and its predecessor AT&T Bell Laboratories, the place where he started his GovCon career.

“You could go up and ask anything to people that were just incredible engineers with long careers, and they would sit down, spend half a day with you, and help teach you. So it was a good learning environment. I learned a lot of those things that I think most design engineers learn,” Von Thaer said of the famed Bell Labs.

Executive Mosaic extends its congratulations to Lou Von Thaer and the Leidos team for their receipt of this award.