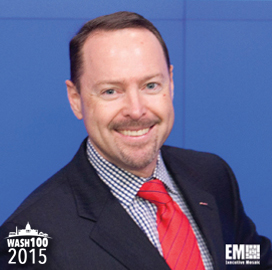 Executive Mosaic is glad to introduce John Hillen, an executive in residence and professor of practice at George Mason University’s school of business, as the newest inductee into the Wash100 — a group of influential leaders in the government contracting industry.

“Can the total effect of one business leader’s efforts be more than the sum of his roles?” That’s a question the former CEO of Sotera Defense Solutions and former assistant secretary of state for political-military affairs frequently puts to himself, he told Executive Mosaic.

Hillen led the company through its initial public offering in 2009 — when it was still known as Global Defense Technology & Systems — and its sale in 2011 to private equity firm Ares Management for $315 million.

He is also an senior operating adviser for private equity firm LLR Partners and is a member of the board of directors for IAP Worldwide Services, Software AG‘s Government Solutions subsidiary and Atkins Nuclear Solutions.

He is an appointee to the U.S. Navy‘s federal advisory commission and holds a Ph.D from Oxford University.

The former Professional Services Council chairman penned a series of articles in the summer of 2014 for Washington Technology to question whether the GovCon space — both the government customers and the commercial suppliers — was ready to go to the next level of “industry maturity,” a level he characterizes as one with more competition, more innovation, more diversity of offerings and more transparency.

Now at GMU, Hillen teaches classes in entrepreneurship, strategy and leadership to M.B.A. students at Mason in an effort he says seeks to “push the interconnection between the three topics – ones that have defined my career in business, government and the military. “

Executive Mosaic congratulates John Hillen for his selection to receive this award.