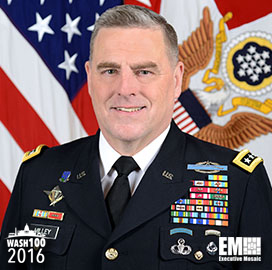 Executive Mosaic is honored to introduce U.S. Army Chief of Staff Gen. Mark Milley as an inductee into the 2016 edition of the Wash100 — Executive Mosaic’s annual selection of influential leaders in the government contracting arena.

Milley received Senate confirmation to become the top uniformed officer for the service branch in August 2015.

He said in an October 2015 interview that he would ensure that service personnel have adequate tools and training experience in order to equip them for future missions.

“What I have got to do is ensure that adequate money is committed to the manning, training, equipping and leadership functions which constitute readiness,” Milley said.

At a November 2015 Defense One Summit, the chief of staff urged the U.S. and its allies to deal with Russian aggression with a strong and balanced approach.

“We want on the one hand to maintain strength in order to deter further Russian aggression and we need to stand firm where that aggression manifests itself,” he added.

Milley previously served as commander of the Army Forces Command prior to his appointment as chief of staff.

He has held several other leadership positions across the military branch’s special forces and other divisions over the last three decades.

Executive Mosaic congratulates Gen. Mark Milley and the U.S. Army team for their selection to receive this award.