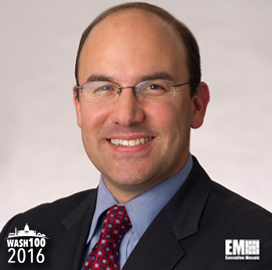 Executive Mosaic is honored to introduce Juan Zarate, the chairman and co-founder of the Financial Integrity Network, as an inductee into the 2016 edition of the Wash100 — Executive Mosaic’s annual selection of influential leaders in the government contracting arena.

FIN works with clients to develop strategies for their counter-illicit financing efforts.

Zarate also serves as a senior adviser on transnational threats, homeland security and counterterrorism at the Washington-based policy think tank Center for Strategic and International Studies.

He is the author of “Forging Democracy” published in 1994 and “Treasury’s War: The Unleashing of a New Era of Financial Warfare” published in 2013.

Zarate told our sister sites ExecutiveBiz and Executive Gov in 2014 that his work with the U.S. government to bolster national security interests after 9/11 involved “financial warfare” to cut off funding support terrorists received.

“With a lack of international standards specific to terrorist financing and no concerted international campaign against illicit finance tied to national security, we needed to set out a strategy that reshaped how we thought about and leveraged financial integrity,” he said.

Zarate noted that the post-9/11 environment called for increased information-sharing and cooperation between the Treasury Department and the financial industry to block illicit financial activity and isolate the financial apparatus of adversaries.

He also urged the U.S. government to continually evolve its financial-related campaigns amid the rise of asymmetric threats through an expanded scope of legitimate financial actors.

Executive Mosaic congratulates Juan Zarate and the FIN team for their selection to receive this award.