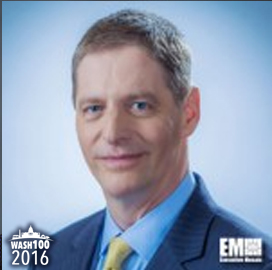 Executive Mosaic is honored to introduce Lou Von Thaer, CEO of DynCorp International, as the newest inductee into the 2016 edition of the Wash100 — Executive Mosaic’s annual selection of influential leaders in the government contracting arena.

Von Thaer joined the McLean, Virginia-based logistics and military services contractor in Summer 2015 and brings more than 30 years of government contracting experience to his role.

Our sister site ExecutiveBiz spoke to Von Thaer in early January for an update on his first six months at the company and push to expand its footprint in international markets and others he identified as core to growth.

Foreign military sales contracts are one means to grow the geographic presence and direct agreements with international governments could be another for the company, he said.

“Today, the direct international business to those customers is less than five percent of our sales. We would like to see that double in the years to come,” Von Thaer told ExecutiveBiz.

Von Thaer is a former president of the national security sector at Leidos and its predecessorScience Applications International Corp., where he oversaw a portfolio of ISR, cyber, logistics and systems support services for two years.

He held the role of president at the former General Dynamics advanced information systems unit prior to Leidos and was also a corporate vice president for the parent company.

Executive Mosaic congratulates Lou Von Thaer and the DynCorp International team for their selection to receive this award.