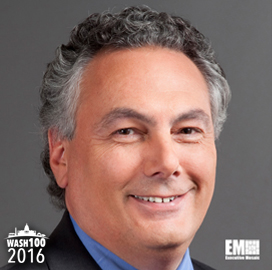 Executive Mosaic is glad to unveil Science Applications International Corp. (NYSE: SAIC) CEO Tony Moraco as an inductee into the 2016 Wash100 — Executive Mosaic’s annual selection of the most influential voices in the government contracting arena. Moraco is a three recipient of this award.

Moraco has led the McLean, Virginia-based government services contractor since its September 2013 launch via the split of the former SAIC into two new independent companies with one of them now known as Leidos Holdings (NYSE: LDOS).

In March 2015, SAIC made a contribution to the GovCon services market’s ongoing trend of consolidation when it announced the $790 million cash deal to purchase intelligence community contractor Scitor Corp. from former owners Leonard Green & Partners.

Scitor’s customer base also includes the U.S. Air Force, a market which Moraco described to investors after the deal’s initial announcement as one along with the intelligence community “that has very little overlap with our existing business.”

Moraco also told investors then that the deal both offered SAIC “high concentration” in and reintroduced it intelligence market, from which Scitor derived 80 percent of annual sales.

“We’re running $1 billion businesses in the Army and Navy and our objective is to have $1 billion serving our customer groups, the lines of business focused on our customers,” Moraco said.

“We think that $1 billion scale within each of those enterprises is at about the right level.”

The transaction closed in May 2015 and Scitor has become a part of SAIC’s intelligence group, which the parent estimates to represents 11 percent of its total customer mix.

SAIC has exceeded Wall Street’s earnings expectations in two out of three quarters to-date in its 2016 fiscal year, which runs on a February-January basis, with one quarter above analysts’ revenue expectations and another in line.

Executive Mosaic congratulates Tony Moraco and the Science Applications International Corp. team for its selection to receive the award.