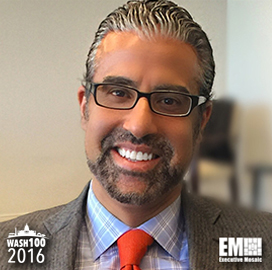 Executive Mosaic is honored to announce Veritas Capital Managing Partner Ramzi Musallam as an inductee into the 2016 edition of the Wash100 — Executive Mosaic’s annual selection of influential leaders in the government contracting arena.

The 20-year private equity veteran has chaired the boards of directors at more than 25 Veritas-owned companies and also worked with portfolio businesses in government contracting and adjacent markets such as aerospace and defense, healthcare, technology, national security, communications, energy and education.

Musallam has helped lead Veritas since its debut fund in 1997, manages the firm’s investment activities and oversees its daily operations.

Musallam said at the time that Veritas sought to help StandardAero grow in the maintenance, repair and overhaul services market.

Veritas says its portfolio of companies in the GovCon have generated more than $8 billion in sales per year and private equity market research outlet Preqin has listed the firm in the “Most Consistent Performing Buyout Fund Managers” list for both 2014 and 2015.

Executive Mosaic congratulates Ramzi Musallam and the Veritas Capital team for their selection to receive this award.