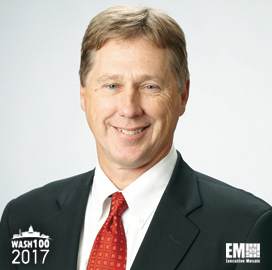 Executive Mosaic is honored to announce John Vollmer, president of the management services segment at AECOM, as an inductee into the 2017 edition of the Wash100 — Executive Mosaic’s annual selection of influential leaders in the government contracting arena.

Vollmer officially assumed his duties as head of the estimated $3.4 billion segment in September 2016 upon the promotion of Randy Wotring to president of technical and operational services at the Los Angeles-based engineering and infrastructure services contractor.

In this capacity, Vollmer oversees AECOM’s technical and management services work for federal agencies such as the departments of Defense and Energy.

Prior to this role, he served as an executive vice president and chief operating officer for AECOM’s management services segment and was responsible for operations, technology development, performance management, business growth strategies and credentialing efforts.

Within management services, AECOM has 14,000 employees across 70 countries.

The 35-year GovCon sector veteran joined AECOM in 2014 upon the company’s $4 billion acquisition of URS, where he served as EVP of operations for the federal services business.

Executive Mosaic congratulates John Vollmer and the AECOM team for their selection to receive this award.