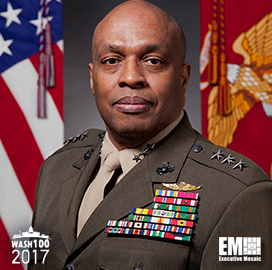 Executive Mosaic is honored to introduce Marine Corps Lt. Gen. Vincent Stewart, director of the Defense Intelligence Agency, as an inductee into the 2017 edition of the Wash100 — Executive Mosaic’s annual selection of influential leaders in the government contracting arena.

Stewart took over as DIA director in January 2015 and also assumed responsibility of the Joint Functional Component Command for Intelligence, Surveillance and Reconnaissance.

He told The Cipher Brief in April 2016 that he works to lead, maintain standards, establish the course of DIA’s vision and hire analysts to support the agency’s mission.

Stewart noted to the publication he aims to achieve the right combination of field operators and analysts at DIA.

“If I can convince some of my combatant commanders to let me borrow some of their operators so that we can have that operational flavor, I think it would be very helpful,” he said in that interview.

Stewart said at the September Intelligence and National Security Summit that DIA can reorganize to meet the new administration’s top priority among threats and challenges facing the U.S.

The three-star general previously led the Marine Forces Cyber Command and served as intelligence director at the Headquarters Marine Corps.

Stewart’s three-decade military career includes roles as assistant chief of staff for intelligence for the 2nd Marine Expeditionary Force; and senior intelligence planner at the Office of the Under Secretary of Defense for Intelligence.

Executive Mosaic congratulates Lt. Gen. Vincent Stewart and the DIA team for their selection to receive this award.