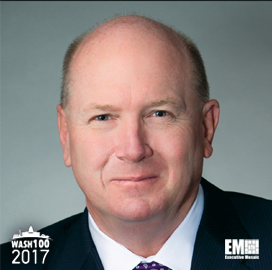 Executive Mosaic is glad to unveil CACI International President and CEO Ken Asbury into the 2017 edition of our Wash100 — the government contracting arena’s Most Influential Voices — for his fourth consecutive induction.

“As we successfully implement this new program, we will expand the support we provide to command and control and large-scale global space systems sustainment programs,” Asbury told investors in October.

“The important part of that is that we are winning these larger jobs at a rate that I think is consistent with where we want to be in the future,” Asbury said.

With the NSS integrated, CACI has targeted a return to organic growth in the company’s next fiscal year that starts in July after a three-year period that saw the company make $1.4 billion in acquisitions that included NSS and Six3.

“I think we are at a really good size today. We are not playing this game right now to look at scale or to add revenue. We are looking to add areas where we believe the market is going to grow such as we talked about in the acquisition of NSS,” Asbury said in the October call.

“We will do something again in the market, that’s the third pillar of our overall strategy. But I couldn’t say anything about the timing of that right now,” Asbury said.