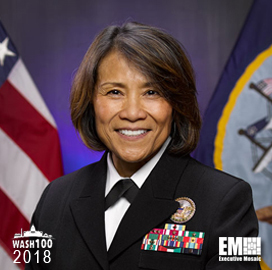 Executive Mosaic is pleased to introduce Navy Vice Adm. Raquel Bono, director of the Defense Health Agency, as an inductee into the 2018 edition of the Wash100 — Executive Mosaic’s annual selection of influential leaders in the government contracting arena–for her work on improving interoperability between health and those on the battlefield.

The Defense Departmentintroduced this year an interim final rule that will implement changes to the Tricare military health care program on Jan. 1.

Bono said in September that under the new rule, DHA will transition the Tricare program’s administration from fiscal year to calendar year and implement the Tricare Select self-managed health plan that seeks to replace Tricare Standard and Extra plans by January.

“We will also be broadening access for beneficiaries by setting out the requirements that at least 85 percent of our beneficiaries have access to network providers in Tricare Select,” she added.

In an April interview with Stars and Stripes, Bono said the Tricare support contracts, launch of the MHS Genesis electronic health records system and a package of reforms that Congress passed in December 2016 provide opportunities to integrate medical readiness with efforts to build up health care delivery.

“This is historic because we have the opportunity here to redesign our system of health,” Bono said.

“At the heart of it, I believe, is a growing recognition, both in the military health system and the commercial and private health care system, that our patients truly need to be co-designers.”

She said she believes DHA should respond to administrative challenges through a “streamlined” Military Health System and implement a new EHR system designed to facilitate interoperability between warfighters and health providers.

Executive Mosaic congratulates Vice Admiral Raquel Bono and the Defense Health Agency for their selection to receive this award.