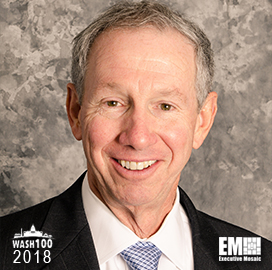 Under Secretary of Defense for Research and Engineering Executive Mosaic is honored to introduce Michael Griffin, defense undersecretary for research and engineering, as an inductee into the 2018 edition of the Wash100 — Executive Mosaic’s annual selection of influential leaders in the government contracting arena–for demonstrating excellence in space policy acquisition and defense innovation.

In December 2017, the Trump administration announced plans to nominate Griffin, former NASA administrator, for the R&E undersecretary role that is part of a reorganization plan the Defense Department announced in August 2017.

In January of this year, Griffin appeared before Senate lawmakers during his confirmation hearing and said that the Defense Innovation Unit Experimental and the Pentagon’s strategic capabilities office work to facilitate the acquisition process, promote innovation and encourage companies to collaborate with DoD.

He noted that he intends to reform the Pentagon’s weapons procurement process and address the “valley of death” between technology development and production once confirmed.

Prior to his official nomination, he appeared at the American Astronautical Society-hosted Von Braun Symposium in October 2017 in Huntsville, Alabama, and cited issues related to acquisition during a panel discussion on space policy.

“We need to think again, as we have really not since the 1980’s, about our approach to acquisition,” he said. “We take far longer to buy things that we need on behalf of the taxpayers, and we spend more money trying to prevent a mistake than the cost of the mistake.”

Griffin, who led NASA between 2005 and 2009, recently worked at Schafer Corp. as chairman and CEO.

He held various roles at the space agency such as chief engineer and associate administrator for exploration.

Executive Mosaic congratulates Michael Griffin for his selection to receive this award.