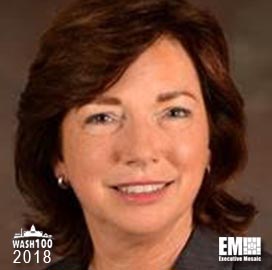 Executive Mosaic is pleased to announce Barbara Humpton, Siemens Government Technologies president and CEO as an inductee into the 2018 edition of the Wash100 — Executive Mosaic’s annual selection of influential leaders in the government contracting arena — for her exemplary work in program leadership and energy contracting management.

Humpton, with more than 30 years in the GovCon industry, is no stranger to working effectively in leadership roles at major technology firms. She signed on to Siemens Government Technologies in 2011 as a senior vice president in business development and took on the chief executive role in late 2015. Prior to joining Siemens Government Technologies, Humpton held roles at IBM Federal Systems, Booz Allen Hamilton, and Lockheed Martin.

“I just never have been one to say I’m working toward this or that,” Humpton said after her appointment to CEO. “I’ve been trying to do the most challenging things in front of me and what needs to be done and, boy, it’s been amazing how the right opportunities have presented themselves.”

Siemens’ work over the years with the U.S. military is widespread, holding fast to proven methods of collaboration as the company’s energy business expands in new and exciting ways throughout the aerospace, defense and energy environments.

“The U.S. Army continues to lean forward in using flexible financing arrangements such as ESPCs to save energy— and taxpayer dollars,” said Humpton.

“Energy, in particular, has quite a bit of work that can be done for federal customers with private investments. Ultimately, we’re talking about literally billions of dollars of addressable energy savings across the federal government, and there is a community of financiers in the federal space making all of that work possible,” she said. “Regardless of politics or policy, everybody understands the value of reducing expenses and finding good solutions for the taxpayer. These new digital tools that the industry is bringing to market today are truly going to transform the way our federal customers are working.”