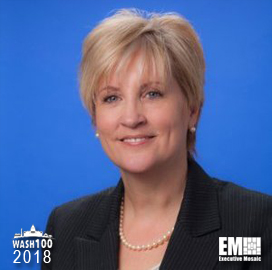 Executive Mosaic is honored to introduce Catherine Kuenzel, vice president of enterprise services for Microsoft‘s public sector business in the Americas, as an inductee into the 2018 edition of the Wash100 — Executive Mosaic’s annual selection of influential leaders in the government contracting arena–for her leadership in managing enterprise services and personal mentoring style.

Under her leadership, CSRA secured a potential $967 million contract from the Department of Homeland Security in 2015 to deliver managed IT services to a DHS-run data center.

Kuenzel said at the time that CSRA will apply an “as-a-service” business model to help DHS manage and secure its IT operations.

She told ExecutiveBiz in an interview in 2010 that her two-decades of experience in the technology industry taught her how to effectively communicate with customers about their technology needs and goals.

Kuenzel, who was vice president of Northrop Grumman‘s federal civilian business from 2002 to 2013, added that mentoring is key to a well-rounded career.

“We also have a responsibility to mentor the next generation of engineers and scientists,” she noted.

Executive Mosaic congratulates Catherine Kuenzel and the Microsoft team for their selection to receive this award.