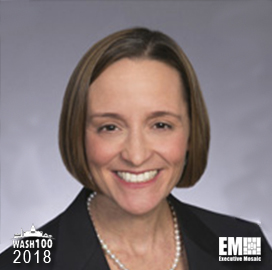 Executive Mosaic is pleased to announce Amy Gilliland, president of General Dynamics Information Technology, as the newest inductee into the 2018 Wash100 — Executive Mosaic’s annual selection of influential leaders in the government contracting arena — for her leadership in expanding GDIT’s contract portfolio.

Under Gilliland’s stewardship, the Fairfax, Va.-based division has won numerous contracts that include: a spot on a potential five-year, $975 million indefinite-delivery/indefinite-quantity contract for simulation and training services to support the U.S. Army; and a $52 million task order to provide technical, scientific and other strategic support services for the Army Medical Material Development Activity. GDIT also secured the potentially $47 million Distributed Mission Operations Center – Infrastructure, Development and Engineeringcontract to develop and maintain simulation hardware and software for the U.S. Air Force, as well as a contract to maintain and operate the Army Intelligence and Security Command’s IT networks.

Gilliland oversees the delivery of IT platforms, systems engineering, simulation and training, and professional services to defense, intelligence, federal civilian agencies and the commercial sector. The 12-year General Dynamics veteran — and former U.S. Navy surface warfare and public affairs officer — joined the company in 2005 and has held several senior leadership roles, such as senior vice president of human resources and administration, chief of staff for the CEO and staff VP of strategic planning and investor relations. Prior to her appointment as president, she served as senior VP and deputy for operations of GDIT.

“Amy is an effective leader who understands the complex business in which we operate,” said predecessor Daniel Johnson in a press release following her August appointment. Johnson was a Wash 100 inductee himself in 2015, 2016 and 2017.

In other GD news, the company announced on Monday it plans to acquire CSRA in a deal valued at $9.6 billion, offering to pay $40.75 in cash for each share and to assume $2.8 billion of the Falls Church, Va.-based IT services contractor’s debt. GD says it expects to finalize the transaction by mid-year, subject to antitrust regulatory review.

Executive Mosaic congratulates Amy Gilliland and the GDIT team for their selection to receive the award.