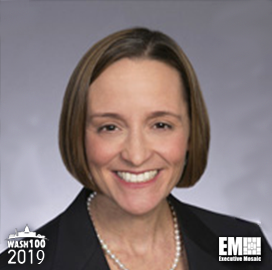 Executive Mosaic is honored to introduce Amy Gilliland, president of General Dynamics Information Technology, as an inductee into the 2019 Wash100 “” Executive Mosaic's annual selection of most influential voices in the government contracting arena “” for her leadership to secure multiple contracts for GDIT and for helping develop pay management systems, cybersecurity and other technology for the Joint Chiefs of Staff.

In 2018, GDIT received a $189 million contract extension from the U.S. Navy to continue helping the service in upgrading its personnel and pay management system. The PERSMOD contract supports the Navy Standard Integrated Personnel System, a human resource platform that helps the service manage staff, leave, pay and entitlement transactions worth more than $34B of the military branch's annual budget for personnel.

The Navy also awarded the company a spot on a potential $636.9 million multiple-award contract to develop and train forces that support missions of the Joint Chiefs of Staff. The contract tasks the selected contractors to provide cybersecurity, simulation and architecture design, planning, concept, scenario, courseware development, logistics and facility operations.

“Amy is an effective leader who understands the complex business environment in which we operate,“ said Daniel Johnson, who had been head of the group that oversees General Dynamics' IT and mission systems business units since 2015.

Executive Mosaic congratulates Amy Gilliland and the GDIT team for their selection to receive the award.

The Wash100 award, in its sixth annual year, recognizes the most influential and impactful executives in the GovCon industry, as selected by the Executive Mosaic organization in combination with web nominations from the GovCon community. Representing the best of the private and public sector, the winners demonstrate superior leadership, innovation, reliability, achievement and vision.