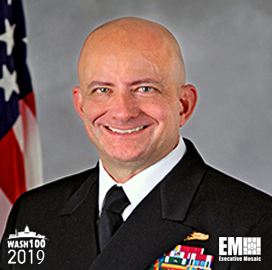 Executive Mosaic is pleased to announce that Navy Vice Adm. Robert “Bob” Sharp, director of the National Geospatial-Intelligence Agency, was selected to the 2019 edition of the Wash100 “” Executive Mosaic's annual selection of the most influential voices in the government contracting arena “” for his vision to improve the agency's capabilities in its use of emerging technologies. This latest honor marks his first Wash100 win.

Sharp succeeds Robert Cardillo as agency director after receiving Senate confirmation in December 2018. He will be elevated to the rank of vice admiral in the Navy.

He graduated from the University of the Pacific in 1988 with a bachelor's degree in English and was commissioned through Officer Candidate School the same year. He earned his master's degree from the Industrial College of Armed Forces in 2008.