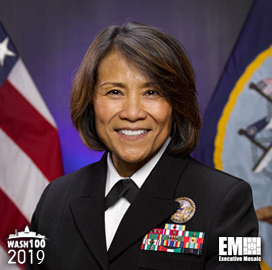 Executive Mosaic is honored to introduce Navy Vice Adm. Raquel Bono, director of the Defense Health Agency, as an inductee into the 2019 Wash100 “” Executive Mosaic's annual selection of the most influential voices in the government contracting arena “” for leading the efforts to improve health services for the U.S. military. This marks Bono's third consecutive Wash100 award.

Bono currently leads the efforts to help the U.S. armed forces build a medically ready force to provide integrated, affordable and high quality military health service. She became head of DHA in 2015 after serving in various key medical positions across the Navy.

Previously, Bono served as deputy director of Medical Resources, Plans and Policy, as command surgeon of the U.S. Pacific Command and chief of Navy Medical Corps, among other roles. To date, as director of DHA, Bono continues efforts to provide the U.S. military with improved health services.

In early January, Bono announced that the DHA is considering reforms of the U.S. Military Health System starting in the 2020s to help over 300,000 local patients, NBC San Diego reported. The agency plans to put all three healthcare systems of the Army, Marine Corps and Navy under a single management on Oct. 1, 2020, to streamline patient care.

“We're really trying to drive towards more standardization and a more consistent experience of care for our patients,” Bono said. “What we're accomplishing is a standardization of the appointment process, a standardization of how people get their specialty referrals and then also it'll allow us to aggregate some of our business processes and get a little more efficient.”

DHA said the streamlined process will make it easier for patients to transfer care to civilian hospitals or move to other parts of the country. In 2018, the agency began working with the military community to improve the Department of Defense's new electronic health records platform, the MHS Genesis.

The Bono said DHA sought feedback from users as well as lawmakers, consultants and members of the press to help adjust the technical features of the platform. “It's how we plan to get better,“ she said. MHS Genesis is designed to help healthcare providers process medical records for nearly 9.4 million MHS beneficiaries.

Executive Mosaic congratulates Vice Adm. Raquel Bono and the Defense Health Agency for their selection to receive this award.

This year represents our sixth annual Wash100 award selection. The Wash100 is the premier group of private and public sector leaders selected by Executive Mosaic’s organizational and editorial leadership as the most influential leaders in the GovCon sector. These leaders demonstrate skills in leadership, innovation, achievement and vision.