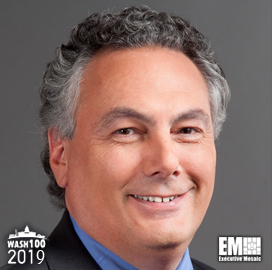 Executive Mosaic is pleased to announce Tony Moraco, CEO of SAIC, as an inductee into the 2019 edition of the Wash100 “” Executive Mosaic's annual selection of the most influential leaders in the government contracting industry “” for his role in SAIC's ongoing $2.5B acquisition of Engility and driving five consistent quarters of financial success for the company. This marks Moraco's sixth Wash100 win.

SAIC's acquisition of Engility is an all-stock deal to establish a new government technology and professional services contractor, GovConWire reported in September. As a result of the deal, SAIC's intelligence sector and space technology receives a significant boost and creates the second largest independent technology integrator for U.S. government services.

During the 2018 investors call for SAIC's third-quarter, Moraco highlighted the importance of delivering strong performance across the company's contract portfolio. Under his leadership, the revenue growth for the company increased by three percent in the 2018 third-quarter compared to 2017. Moraco attributes SAIC's success to sustaining its existing and newly awarded contracts, including local and state IT modernization programs while increasing orders in its supply chain portfolio.

Over the last year, SAIC expanded its influence in the federal market and received a number of beneficial government contracts. In November, the Defense Logistics Agency's Global Tire program awarded SAIC a potential $900M contract to provide supply chain management services for the program.

In March, a potential five-year, $554M contract with the U.S. Army was awarded to SAIC to provide training support services and assist in the development of live, virtual, constructive training systems for warfighters across the United States.

In 2006, Tony Moraco joined SAIC and held different leadership roles with the company before he was appointed CEO in 2013. With thirty years of experience, his knowledge of the federal sector and experience serving the Department of Defense, civilian agencies and the intelligence community has allowed him to consistently create strong organic sales growth for SAIC.

Moraco will continue to serve as CEO following the official acquisition of Engility. He also serves as a board member for the Northern Virginia Technology Council and the Intelligence and National Security Alliance (INSA).

Executive Mosaic congratulates Tony Moraco and the SAIC team for their selection to receive this award.

This year represents our sixth annual Wash100 award selection. The Wash100 is the premier group of private and public sector leaders selected by Executive Mosaic's organizational and editorial leadership as the most influential leaders in the GovCon sector. These leaders demonstrate skills in leadership, innovation, achievement, and vision.