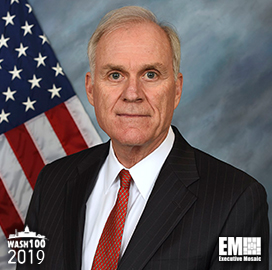 Executive Mosaic is honored to introduce Richard Spencer, secretary of the U.S. Navy, as an inductee into the 2019 Wash100 — Executive Mosaic’s annual selection of the most influential voices in the government contracting arena — for focusing on the acquisition process, prioritizing modernization and developing emerging technologies for the Navy.

This honor marks the second consecutive year that Spencer received a Wash100 Award.

Spencer took office in August 2017. Prior to his confirmation, he addressed President Donald Trump’s proposal to increase the naval fleet to 355 ships, saying that the branch should focus on the capability, power and sophistication of itsweapons systems.

“Can we have a capacity number but have a capability that’s even greater than that?” Spencer said. “With more assets, more capability and more capacity, we could do a better job.”

Speaking at the Surface Navy Association’s Annual National Symposium in January 2019, Spencer said the branch plans to appoint an assistant secretary for information management. The new position would focus on cloud computing, cybersecurity, artificial intelligence and other technologies.

“One of the things that we are exploring right now is how to put the focus and talent to address information management inside the Navy,” Spencer said.

The secretary also highlighted the Navy’s need to allocate its research, development, test and evaluation budget into “Force 2.0” capabilities, which include developmental platforms and weapons systems.

McAleese and Associates issued a report in December 2018 illustrating how Spencer’s priorities could enhance the Navy’s capabilities. The report highlights Spencer’s funding request in fiscal 2020 to support the branch’s modernization “buckets” that include upgrades to its legacy systems.

He also said the service needs to adopt the other transaction authority to speed up its acquisition efforts. By increasing the Navy’s capabilities, the secretary wants to improve its cybersecurity.

He held executive positions at Crossroads Investment Management, Intercontinental Exchange and Fall Creek Management and served on the board of directors for Global Atlantic Financial Group, ENGAGEcx LLC, 86Borders and StarPound Technologies.

Executive Mosaic congratulates Richard Spencer and the U.S. Navy for receiving this award.