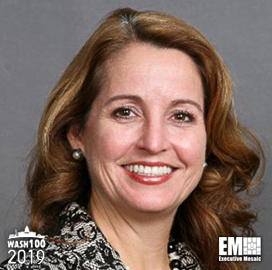 Executive Mosaic is pleased to announce Federal Chief Information Officer Suzette Kent as an inductee into the 2019 edition of the Wash100 “” Executive Mosaic's annual selection of the most influential voices in the government contracting arena “” for her vision and continuing efforts to modernize cybersecurity and information technology in federal agencies.

In June 2018, the Office of Management and Budget awarded $45 million in the first round of funding to the departments of Housing and Urban Development, Energy and Agriculture. HUD received $20 million to accelerate the migration of its mainframe applications. DOE secured $15 million to migrate its email service to a cloud platform, while USDA obtained $10 million to build the farmers.gov customer portal.

Kent said OMB plans to launch additional programs to address gaps in the federal information technology workforce. The government will boost its efforts to recruit entry-level IT employees and retain personnel in cybersecurity. In December 2018, Kent announced plans to release its draft policy to update the Trusted Internet Connections program for 2019.

“Part of the reason I'm so passionate about modernization and driving it quickly is the way that we become more secure, the way that we protect our infrastructure, is to have more of an infrastructure and to not be looking at things that were designed so many years ago,“ Kent stated during her keynote speech during CyberTalks in October 2018.

In her capacity, Kent emphasizes technology innovation for government agencies. She stressed the need for agencies to understand and organize their data management operations and other factors prior to investing in artificial intelligence systems. In November 2018, OMB updated its Data Center Optimization Initiative to comply with the 2017 FITARA Enhancement Act. Kent wants to align the initiative with the cloud smart strategy and optimization metrics of data centers.

President Trump appointed Kent to the federal CIO post in January. Prior to her current role, she served as a principal of financial services at EY. She has been a partner at Accenture, a consulting president for Carreker Corporation and a managing director at JPMorgan.

With 30 years of experience in the federal market, Kent learned the importance of creating new opportunities and retooling the workforce. She is a leader in the fields of organizational learning, diversity and inclusiveness and career development for every organization where she worked.