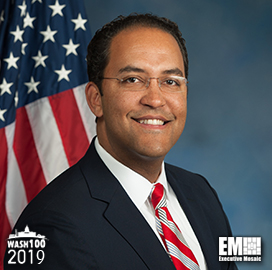 Executive Mosaic is honored to introduce Rep. Will Hurd, R-Texas, as an inductee into the 2019 Wash100 “” Executive Mosaic's annual selection of the most influential voices in the government contracting arena “” for his efforts to strengthen U.S. national security.

This marks the second consecutive Wash100 award for Hurd.

Hurd entered the House after a career managing business operations and growth efforts in both the public and private sectors. He also provided intelligence to the federal government from his missions in the Middle East and South Asia as an undercover officer at the CIA for nearly a decade.

The two-time Wash100 inductee was elected to the 114th Congress in 2015 and serves as a member of multiple committees focusing on government reform, information technology, homeland security and intelligence.

As a member of the House, Hurd supported several initiatives to strengthen national security. In early January, House lawmakers approved a bill reauthorizing the role of the federal chief information officer to secure U.S. digital infrastructure.

“This bill helps keep the vast information stored by the federal government secure from hackers by making clear that the federal CIO is in charge of the security of our data across the government,” said Hurd, who was one of the bill's sponsors.

He also joined other lawmakers to introduce bipartisan legislation to improve how the U.S. responds to threats posed by the country's technology competitors.

The bill would establish a new office at the White House to serve as a central coordinator to deter attacks on U.S. technologies. Hurd said the bill would also hold foreign adversaries like China accountable for actions such as cyberattacks.

Recognizing his efforts to boost national security, House lawmakers appointed Hurd as a new member of the appropriations committee on Jan. 16 to help manage public funding across the federal government.

“The House Appropriations Committee funds efforts that not only are crucial to our national security but also impact the everyday public health and safety of communities I represent and fight for each day in Congress,“ Hurd said.

Executive Mosaic congratulates Representative Will Hurd and his team for receiving this award.