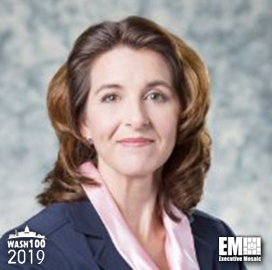 Executive Mosaic is pleased to introduce Northrop Grumman CEO Kathy Warden as an inductee into the 2019 Wash100 “” Executive Mosaic“™s annual selection of the most influential voices in the government contracting arena “” for leading Northrop“™s enterprise services and four operating sectors and securing several major contracts for the company.

Warden joined Northrop in 2008 after working for General Dynamics, General Electric and Veridian. She was appointed as the company“™s new CEO in July 2018 following the announcement that then-CEO and Chairman Wes Bush will step down in 2019.

The company secured three major indefinite-delivery/indefinite-quantity contracts in 2018, including a potential seven-year, $3.6B contract in December to support the U.S. Air Force“™s Large Aircraft Infrared Counter Measures program, a potential five-year, $697M award in October to perform system configuration modifications for the U.S. Navy and the government of Australia“™s EA-18G Growler aircraft.

A report from McAleese and Associates listed several defense programs under the “watchlist“ of Warden in October. The programs include the U.S. Air Force“™s Ground Based Strategic Deterrent competition, Overhead Persistent Infrared Geosynchronous, the U.S. Navy“™s Next-Gen Jammer Low-band and “restricted space“ programs.

“Many of the things that we are pursuing are awards in the 2020 timeframe,“ Warden said during the company“™s third-quarter earnings call in Oct. 2018. “For the OPIR programs, we have both the “˜GEO“™ payload, as well as the OPIR Polar satellite program.“

Warden serves on the Federal Reserve Bank of Richmond board of directors and served on the Internet Advisory Council during the Clinton Administration. Her other milestones include being one of the 24 female executives leading companies on the Fortune 500 list.