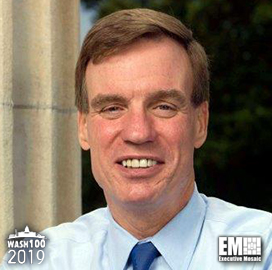 Executive Mosaic is honored to name Sen. Mark Warner, D-Va., as an inductee into the 2019 Wash100 “” Executive Mosaic“™s annual selection of the most influential voices in the government contracting arena “” for his focus on national security and implementation of cybersecurity measures.

Warner, who is vice chairman of the Senate Intelligence Committee, supported numerous bills addressing national security and cybersecurity in 2018. He introduced provisions to a fiscal 2019 defense policy bill that updates national doctrine on how the government responds to a foreign cyberattack targeting election systems.

“The true cost of our cyber vulnerabilities won’t be sudden or catastrophic,” Warner said. “They will be gradual and accumulating.”

To address emerging cyber threats, Warner joined Sen. Marco Rubio, R-Fla., in a proposal in early January 2019 to establish the Office of Critical Technologies and Security at the White House to deter national supply chain risks.

The proposed office would supervise inter-agency coordination and provide a standardized, long-term strategy to protect the U.S. supply chain from cyber attacks, particularly those by foreign adversaries. Warner also called on the government to set new guidelines for cyber warfare and its response to threats from Russia and China in cyberspace.

Warner was elected to the Senate in Nov. 2008 and reelected to a second term in 2014. He continues to serve on the Senate finance, banking, budget and rules committees. He served as governor of Virginia from 2002 to 2006. When he left office, Virginia was ranked as the best managed state, the best for business and the best in public education.

Warner spent 20 years as a venture capitalist in telecommunications, IT and health care. He was an early investor in the cellular telephone industry. He co-founded the company that became Nextel and invested in hundreds of start-up technology companies that created tens of thousands of jobs.

Warner earned a bachelor“™s degree from George Washington University and was valedictorian of his class in 1977. He graduated from Harvard Law School in 1980.

Executive Mosaic congratulates Mark Warner and his staff for receiving this award.