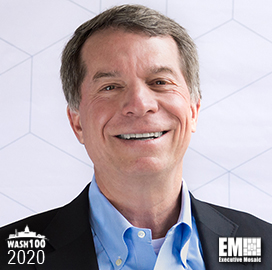 George Wilson, President and CEO of ECS Federal, Named to 2020 Wash100 for Leading Efforts to Drive Innovation in Cybersecurity, IT Modernization

Executive Mosaic is honored to present George Wilson, president and CEO of ECS Federal, as an inductee into the 2020 Wash100 Award for his leadership and vision while driving innovation in cybersecurity, information technology modernization and emerging technologies in the government contracting sector.

This marks the third consecutive Wash100 Award for Wilson. Previously, Wilson secured his last Wash100 Award for leading ECS Federal to expand its workforce, secure major contracts and growing the company exponentially. In 2019, one of Wilson’s top initiatives was to push for the advancement of cybersecurity and defense in the federal government and industry.

In April, ECS opened a new facility to deliver technology capabilities to support both government and commercial customers against cyber threats. The “Cybersecurity Innovation and Technology Operations Center” in Northern Virginia will house its cyber range and laboratories.

“We made the investment in the CITOC so that our developers and engineers had physical and virtual workspaces to share solutions, foster communities of interest and facilitate research, development, testing and operations of cutting-edge tools in cyber, digital and cloud,” said Wilson.

Two months later, ECS received a potential six-year, $276 million task order from the Department of Homeland Security (DHS) to help deploy the Continuous Diagnostics and Mitigation Dashboard Ecosystem and incorporate data ingest and visualization, search performance and indexing tools into the platform. The ecosystem is intended to offer cyber analytics via business and artificial intelligence.

ECS added it will include a threat intelligence technology in the ecosystem to deploy security orchestration automation and response tools, facilitate threat indicator sharing across the government and integrate a risk-scoring algorithm.

The company also received a Platinum Technology Partner designation from Attivo Networks as part of a partnership aimed at introducing a deception platform to the government and commercial cybersecurity markets.

“Our focus on machine learning, cybersecurity and innovation is in lockstep with the work being done at Attivo,” said Wilson. “We’re committed to bringing these powerful tools and strategies to our customers.”

“As ECS continues to innovate within the areas of infrastructure service and health information technology, we look forward to serving NIWC and DHA in this critical modernization endeavor,” said Wilson.

“ECS has a longstanding reputation for establishing strong partnerships with our customers,” said Wilson. “We are proud to continue our relationship with the Treasury Department by helping to drive new technology and processes throughout the U.S. Mint.”

Executive Mosaic congratulates ECS Federal and George Wilson on his third consecutive Wash100 Award win. Wilson’s efforts to advance cybersecurity, defense, IT modernization and emerging technology have led to achievement and growth for the company. His influence over the GovCon sector is undeniable.