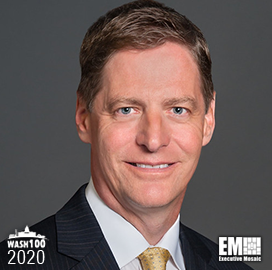 Executive Mosaic is honored to present Lou Von Thaer, president and CEO of Battelle, as an inductee into the 2020 Wash100 Award for expanding the company’s revenue and influence in the sector through valuable contract awards, partnerships and important executive appointments.

This marks Von Thaer’s fifth Wash100 Award. He won his 2019 Wash100 Award for his leadership and efforts advancing biosecurity and other technology for Battelle.

Most notably, Von Thaer drove sale of its counter-unmanned aerial system technology to San Francisco-based firm Dedrone in October 2019. Battelle’s system uses sensors to collect data from wifi, non-wifi and radio frequency-based sUAS before transmitting information to command-and-control systems. Its point-and-shoot mechanism has a potential range of 0.24 miles. The sale has added to Battelle’s revenue and expanded its industry relationships.

In addition, the team will manage subcontractor teams that are assigned to conduct repairs and evaluation services at Marine Corps facilities worldwide. According to Battelle, the firm developed systems and assessed repair procedures and corrosion prevention materials to validate future investments and reinforce preservation of equipment.

Von Thaer spearheaded the energy alliance with the Department of Energy to establish a radiation test facility called the Versatile Test Reactor (VTR). The company will continue to provide development and deployment support to the Versatile Test Reactor that will facilitate radiation tests for current and future designs. VTR is slated for construction in 2022 and operational capacity in 2026.

In addition to significant growth efforts, Battelle also broadened its leadership to include key figures in the government contracting arena. Most recently, Battelle added Stephen Steinour, president and CEO of Huntington Bancshares, to its board of directors. He will help execute the company’s business and philanthropic missions.

Battelle recognized members of its leadership team during the Annual Celebration of Solvers Event in April 2019. Ron Townsend, executive vice president of laboratory operations at Battelle, secured the CEO Award for his management of national laboratories under the sponsorship of DoE and the Department of Homeland Security (DHS).

“Although we have 81 different sites across the U.S., none of them are in Columbus, so we thought we’d bring one of our mobile platforms to our own backyard so people can learn more about this important work,” said Von Thaer.

Executive Mosaic commends Battelle and Lou Von Thaer for his 2020 Wash100 Award. Von Thaer’s vision, leadership and drive to generate exponential growth and expand the company’s presence in the GovCon sector has cemented him as an executive who could be a significant influence in 2020.