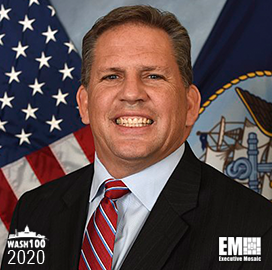 Executive Mosaic is honored to announce James Geurts, assistant secretary for research, development and acquisition at the U.S. Navy, as the newest inductee into the 2020 edition of the Wash100 Award for driving the military service’s approaches to acquire technology and innovate with industry.

This marks the first Wash100 Award win for Geurts. He started in the role on Dec. 5, 2017, after the Senate confirmed him to the position in November of the same year. He is in charge of Navy and Marine Corps equipment procurement programs.

Geurts has oversight of an annual budget in excess of $100 billion and is responsible for equipping and supporting the finest Sailors and Marines in the world with the best platforms, systems and technology as they operate around the globe in defense of the Nation.

"It’s not as much of a glitzy innovation store, but a set of capabilities anybody can access," he said in a keynote speech at the West 2019 event. "On the industry side, if you have an idea, I’m going to make that easy for you. One-stop shop."

He told a GovernmentCIO-hosted forum in June his office created playbooks meant to help the DON acquisition workforce connect with smaller companies that were just starting to pursue federal business opportunities.

The Navy acquisition head furthered the NavalX initiative in September with the creation of five regional offices, called Tech Bridges, across the country. In November, the service branch launched the sixth Tech Bridge in coordination with the Naval Information Warfare Center Atlantic.

Geurts offered his insights into force projection during a keynote speech at the Potomac Officers Club’s 2018 Navy Forum: Agility, Adaptability and Resiliency.

“If I look at the national defense strategy and how we are going to have to fight in the future, it’s going to be driven in large part by our ability to project power and forward presence,” he said at the time.

Before his appointment to the Navy, Geurts served as acquisition executive at U.S. Special Operations Command and earned accolades such as the USSOCOM Medal for his accomplishments while serving in that role.

Geurts began his career at the U.S. Air Force as an acquisition official with leadership positions in weapon systems engineering and program management.

Executive Mosaic congratulates Geurts and the Navy team for their selection to receive the 2020 Wash100 Award. His commitment to accelerate military procurement and innovation will be influential to the GovCon sector.