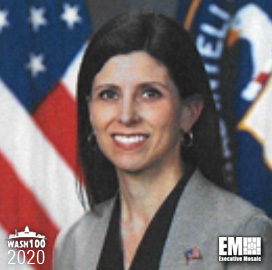 Juliane Gallina, CIO of CIA, Named to 2020 Wash100 for Driving IT, Cloud Adoption and Communication With Industry

Executive Mosaic is pleased to present Juliane Gallina, chief information officer of the CIA, as an inductee of the 2020 Wash 100 Award for her efforts to drive the CIA’s information technology, cloud adoption and reach out across the industry to improve the agency’s success.

This marks Gallina’s first Wash100 Award. Gallina has received the most coveted and prestigious award in government contracting for her leadership, innovation and vision to continue developing advancing technologies and adapt them into national security applications.

Gallina succeeded John Edwards as the CIO of the CIA in April 2019. She assumed the role to advance the agency’s IT capabilities and accelerate the advancement of emerging technologies, including cloud adoption’s pivotal role in the CIA’s future and secure mobility within the agency.

“Welcoming Juliane back to the agency to lead our global IT efforts will ensure CIA continues to outpace our adversaries in IT innovation,” said Andy Makridis, chief operating officer at the CIA.

During Potomac Officer Club’s recent CIO Forum 2020 on Jan. 23rd, Gallina, who served as a keynote speaker at the forum, described that her role in the CIA is to “keep the lights on.” The first step is to keep the lights on, but the greater challenges are buying more light bulbs and planning for the next mode of light bulb. There are three different aspects to keeping the lights on at the CIA.

Gallina hopes to “keep the lights on” and advance our capabilities and advocates for there to be greater communication between industry and federal agencies. She’s argued that industry outreach and working with the intelligence community is critical for the future of innovation as it relates to U.S. national security with artificial intelligence, cloud adoption, secure mobility and other technologies continuing to influence every sector of government contracting and technology.

In addition to the CIA, Gallina serves as the director of the Information Technology Enterprise. She is responsible for all IT systems and personnel for U.S. federal agencies, as well as its global communications network.

Gallina has worked for IBM as vice president of U.S. federal key accounts since Jan. 2018. She’s also held other positions with the company since 2010, including the director of U.S. Federal Solutions. Gallina also served as a commander in the U.S. Navy between 1992 and 2013 and has worked in the National Reconnaissance Office (NRO) for a decade.

Executive Mosaic congratulates Juliane Gallina for being a recipient of the 2020 Wash100 Award. Her commitment to the CIA’s advancement in IT, cloud and communication between the agency and industry will prove to be influential to the GovCon sector over the course of 2020.

The Wash100 award, now in its seventh year, recognizes the most influential executives in the GovCon industry as selected by the Executive Mosaic team in tandem with online nominations from the GovCon community. Representing the best of the private and public sector, the winners demonstrate superior leadership, innovation, reliability, achievement and vision.