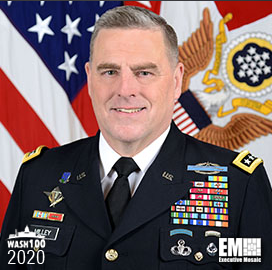 Executive Mosaic is honored to present Gen. Mark Milley, chairman of the Joint Chiefs of Staff, as an inductee into the 2020 Wash100 Award for overseeing over 3 million service members in his new role and for his efforts to preserve regional peace and stability across the globe as well as the safety of U.S. citizens.

This marks the fourth-time in the last five years that Milley has earned a Wash100 Award. He received a 2019 Wash100 Award for supporting development of the service’s competitive technology efforts. His success in those missions led to his nomination as the 20th chairman of the U.S. Joint Chief of Staff in Dec. 2018 to succeed Gen. Joseph Dunford, a former Wash100 Award winner, in the role.

“Congratulations to Gen. Mark Milley on his Senate confirmation to be the next Chairman of the Joint Chiefs of Staff,” Dunford said in a statement via CNN. “Gen. Milley and I have served together multiple times to include our time together in combat. He will be a superb Chairman,” he added.

Milley was confirmed for the role in July 2019 and went on to assume his current role in Oct. 2019 during a ceremony at Joint Base Myer-Henderson Hall in Virginia. The chairman is the highest-ranking military officer in the country and serves as the principal military adviser to the President. In the role, Milley oversees the defense component’s more than 3 million service members.

“I am humbled and honored to be confirmed as the next Chairman of the Joint Chiefs of Staff,” Milley said in a statement following the vote,” said Milley following his confirmation.  “Thank you to the President and the Senate for their confidence.”

Under his new position, Milley advocated that NATO member countries should remain committed to collaboration and avoid complacency to help preserve regional peace and stability in Jan. 2020. Milley argued that NATO should also explore other potential support its members can provide to allied troops as tensions in the Middle East intensify.

“Peace doesn’t happen by accident: It happens because of effort, resources, commitment, allies banding together,” he explained.

More recently, Milley addressed the current COVID-19 situation and urged the U.S. military community to prepare to take health protection measures, which could include social distancing, possibly into the summer months.

“You’re looking at probably late May, June, maybe something as late as July,” Milley said via Stripes on March 24th, 2020. “But we will get through it. It’s not a question of when. We will get through it, and we’ll pull together as a country and a military. We will do whatever is required to defend the people of the United States.”

Executive Mosaic congratulates Gen. Mark Milley for his fourth 2020 Wash100 Award. His commitment to the U.S. military’s missions and protection of U.S. and foreign citizens across the globe have established Milley as one of the most pivotal members of the government contracting (GovCon) sector.