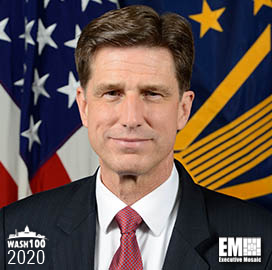 Executive Mosaic is honored to introduce Dana Deasy, chief information officer of the Department of Defense, as an inductee into the 2020 edition of the Wash100 for prioritizing information technology projects that drive DoD's digital modernization and new tech adoption.

This marks Deasy’s second consecutive Wash100 Award. He was previously selected for his first Wash100 Award in 2019 for promoting and developing artificial intelligence capabilities and spearheading cloud adoption effort. Over the last year, he’s found success and continued those missions to receive a second Wash100 Award.

In October 2019, DoD awarded Microsoft the 10-year, $10B Joint Enterprise Defense Infrastructure cloud computing contract, which Deasy said marks a step in the implementation of the department’s digital modernization strategy in support of the National Defense Strategy.

“What’s really unique is the variety of the 14 early adopters allows us to test various principles on JEDI from the tactical edge all the way to the top secret — needing to use the cross-domain,” Deasy said at the AFCEA NOVA Air Force IT Day. “So we’re going to learn fairly quickly what it takes to actually now go from the strategic vision to the ability to stand it up and to bring it to life.”

He mentioned the department’s plan to have the first “unclassified” environment in place by mid-February as part of the JEDI program. “It’s going to have a whole bunch of variety of services,” Deasy said of the unclassified JEDI environment. “We will add on more and more services as time goes on.”

Prior to awarding the JEDI contract, DoD and the General Services Administration awarded General Dynamics’ information technology business the potential 10-year, $7.6B Defense Enterprise Office Solutions contract to replace legacy IT office applications with a standard cloud-based platform across all military services.

"DEOS is a great example of a fit-for-purpose cloud that supports our multi-cloud strategy,” Deasy said. “DEOS will streamline our use of cloud email and collaborative tools while enhancing cybersecurity and information sharing based on standardized needs and market offerings."

In addition to cloud contracts, the department launched in February 2019 a strategy that aims to migrate storage and computing operations to the cloud. “The strategy addresses what we’re trying to do, … the problems we’re trying to solve and the objectives [we want to meet],” Deasy said.

During a House subcommittee hearing in February last year, Deasy mentioned the department’s cyber strategy and how his office works to help protect the defense industrial base. “The Cyber Top 10 focuses on remediation strategies for a complex cyber landscape with components ranging from information networks to our cyber workforce and supply chain, risk management and beyond,” he said.

Deasy also announced in 2019 that DoD is working to demonstrate 5G connectivity across a number of military bases and wants to have the bases sustain and implement the 5G technology after testing.

"One of the things we want to do is not just go in there and do experimentation and pull it out but to actually leave a capability behind that the bases can continue to use from the 5G standpoint," he said at a Defense Writers Group breakfast.

Apart from cloud, cybersecurity and 5G, Deasy has helped advance artificial intelligence. Calendar year 2019 marks the launch of the Pentagon’s AI strategy, which Deasy said supports every facet of the National Defense Strategy.

He noted the department’s AI strategy focuses on increasing agility and speed and that the performance of AI program will depend on the department’s relationships with external and internal partners. “Interagency, industry, our allies and the academic community will all play a vital role in executing our AI strategy,” he added.

DoD’s Joint AI Center is planning to incorporate algorithmic processing into combat operations as part of its Joint Warfighting initiative. “We are ready to start our first lethality project next year in the joint war fighter targeting space,” Deasy said in an interview in December.

Executive Mosaic congratulates the Pentagon and Dana Deasy for his 2020 Wash100 Award selection. His role with DoD and determination to lead the GovCon sector into the future make Deasy one of the most influential names in the industry.