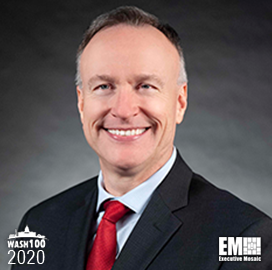 Executive Mosaic is thrilled to present Chris Brady, president of General Dynamics Mission Systems, as an inductee into the 2020 edition of the Wash100 Award for his work to advance and innovate enterprise data, infrastructure systems and defense programs to help and protect federal agencies, military customers and our nation's national security and defense.

This marks the first time that Brady has received a Wash100 Award from Executive Mosaic over nearly three decades in the government contracting (GovCon) sector. Since assuming the position in January 2019, Brady has been responsible for the business unit's overall financial and operational success to solve the toughest security and technology challenges facing our nation.

During an interview with Politico in July 2019, Brady explained that his unit develops a number of satellite payloads for classified programs that are critical to U.S. defense efforts. He explained that the company develops GPS receivers found in U.S. satellites and is involved in the ground segment for NASA's Space Network Ground Segment Sustainment program.

“We of course we do communications payloads for deep space missions,“ he said. “Every deep space program that has been launched by the United States has our communications equipment on board. That includes all the Mars rovers.“

Brady also noted that there is a significant amount of work being carried out with regard to the use of quantum techniques in defensive and offensive combat situations.

“By using some of these techniques you could create rays of elemental particles that are capable of a wide variety of computing functions, memory functions, and sensing the physical world at a far more efficient pace than anything that's ever been done electronically before,“ he added.

Executive Mosaic congratulates General Dynamics and Chris Brady on receiving his first Wash100 Award in 2020. His efforts will continue to advance technological capabilities for U.S. military branches, federal agencies and the GovCon industry throughout 2020.