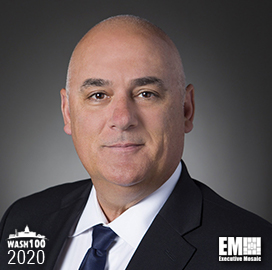 Executive Mosaic is honored to present Roy Azevedo, president of space and airborne systems at Raytheon, as an inductee into the 2020 edition of the Wash100 Award for his efforts to advance defense systems and integrate modern technology into the company's infrastructure. This marks Azevedo's first Wash100 Award.

In October 2019, Raytheon announced that Azevedo will lead the intelligence, space and airborne systems business to be formed upon the closing of its proposed merger with United Technologies Corp. The future organization will integrate the SAS business with Raytheon's intelligence, information and services arm and commercial cybersecurity venture, Forcepoint.

Azevedo has helped the company develop the Capability Drop 4 of the Electronic Warfare Planning and Management Tool (EWPMT) under a multi-million dollar contract from the U.S. Army, with an expected completion date of October 2021.

The simulator is designed to train dismounted infantry and uses the latest technological advances to deliver highly effective training at a moment's notice from any location while dramatically reducing the cost and logistical challenge of high-consequence training missions.

The system will incorporate satellite navigation, laser guidance, high-definition radars, advanced seekers and other emerging technologies. They allow customers to carry out discriminating strikes on targets and defend against incoming attacks with increased effectiveness.

Azevedo will supervise the production and development of the new missiles. Phase I includes the production of 148 qualification units; Phase II will be comprised of the full rate production of spares, out of band replacements at the Fylingdales Royal Air Force Station, and sensitivity improvement units for a maximum total production of up to 40,071 for all five radar sites. The expected completion date of the contract is Sept. 2026.

Azevedo's team will focus on the delivery of the system's new modernized receivers, which will measure and monitor legacy military and civilian signals sent by the current GPS satellite constellation plus the new signals sent by the next-generation GPS IIIs throughout 2019 and into 2020.

"GPS OCX is one of the largest, most complex software development programs in the Department of Defense, and we're now in the home stretch toward full system delivery," stated the company's Intelligence, Information and Services business.

Executive Mosaic congratulates Raytheon and Roy Azevedo for his 2020 Wash100 Award selection. His commitment to the advancement of Raytheon's strategy and emerging technology will be integral to the GovCon sector throughout 2020.