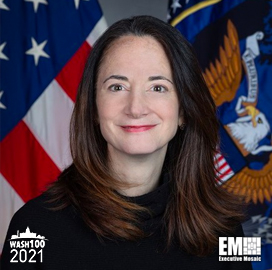 Office of the Director of National Intelligence (ODNI)

Executive Mosaic is honored to present Avril Haines, director of National Intelligence, as an inductee into the 2021 Wash100 Award for spearheading new strategies and priorities across the intelligence community that support national defense and security, as well as emerging capabilities.

This marks Haines' first Wash100 Award. Your votes will help determine who the GovCon community will stand behind as its most influential member. To cast your TEN votes TODAY, visit Wash100.com.

“Avril Haines has continually distinguished herself with consistent operational expertise, said Jim Garrettson, CEO of Executive Mosaic and founder of the Wash100 Award. “She leads through dedicated expertise and is expected by the Intelligence industry to be a unifying force at this critical time in our history.”

The Senate recently confirmed Haines as director of National Intelligence (DNI), and the first female DNI, where she will supervise 18 intelligence agencies, including the Central Intelligence Agency (CIA) and the National Security Agency (NSA).

“The mission of the Office of the Director of National Intelligence (ODNI) has never been more vital to our nation's security or prosperity. At this important moment, with all of the extraordinary challenges and opportunities facing our nation, policymakers need access to timely and analytically rigorous intelligence,“ Haines said upon joining the ODNI.

Haines previously served as deputy national security advisory and deputy director of the CIA in the Obama administration. Prior to her appointment to the CIA, she served as deputy counsel to the President for National Security Affairs in the Office of White House Counsel.

Sen. Mark Warner (D-Va.), vice chairman of the Intelligence Committee, said during Haines' hearing that “The greatest challenge facing you, as the DNI, will be a rising China that is committed to surpassing and eclipsing the U.S. militarily, economically and technologically.“

Haines noted that U.S. intelligence agencies should work together “to support long-term bipartisan efforts to outcompete China, gaining and sharing insight into China's intentions, and capabilities, while also supporting more immediate efforts to counter Beijing's unfair illegal, aggressive and coercive actions, as well as its human rights violations whenever we can,“ Haines said.

Haines added that in order to combat China's aggressive tactics, U.S. intelligence agencies should increase and enhance training to bolster the nation's counterintelligence, as well as develop relationships with government officials to foster education about foreign influence activities.

Following her nomination as DNI by the Biden Administration, Haines has addressed several ways she will work to bolster national security and support initiatives ranging from technology to defense.

“[I] absolutely share … concern that we're actually able to detect these because that's obviously absolutely critical to us protecting against them,“ Haines said. “I think … it was pretty alarming that we found out about it through a private company as opposed to our being able to detect it ourselves to begin with.“

Haines added that because of the nation's cyber vulnerabilities, the government needs new to improve its defenses against attacks. “To prevent a recurrence of this kind of attack, we need to close the gap between where our capabilities are now and where they need to be in order to deter, detect, disrupt and respond to such intrusions far more effectively in the future,“ Haines said.

Executive Mosaic congratulates Avril Haines and the Office of National Intelligence on receiving her first Wash100 Award in 2021. Her efforts will continue to advance the capabilities, critical missions and priorities concerning national defense and security throughout 2021.