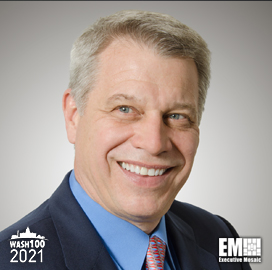 Executive Mosaic is pleased to announce that Mark Gerencser, chairman of Business Executives for National Security (BENS), has been named a recipient of the 2021 Wash100 Award for his stellar leadership as BENS’ chairman and other organizations as well as his drive and vision to establish a whole new national response and address our national security issues.

This marks the fourth-time overall that Gerencser has received the Wash100 Award and the third time in the last four years that he has been recognized with the highest honor in all of government contracting (GovCon).

Visit Wash100.com to cast a vote for Mark Gerencser as the most significant executive of consequence to the GovCon sector. Cast your TEN votes TODAY to advocate your favorite leaders in the federal and government sectors. The elite leader with the most votes by April 30th will be recognized by the GovCon community as the industry’s most influential member.

“Mark Gerencser continues to ascend in his critically important and supportive role for our national security,” said Jim Garrettson, CEO of Executive Mosaic and founder of the Wash100 Award. “Recently accepting the board chairmanship with the Business Executives for National Security (BENS), Mark has celebrated a long career in National Security and Intelligence, 31 years at Booz Allen, his 12 years on the National Security Agency’s special advisory board and current board positions at both Alion Science and Technology as well as Guidehouse. It’s no wonder Mark has received the coveted Wash100 Award for the fourth time.”

In Jan. 2021, BENS appointed Gerencser as chairman of the board and executive committee. He succeeded Norman Chambers and will be responsible for guiding the nonprofit’s strategy to help government partners develop approaches for addressing national security challenges.

“Gerencser is a long-time BENS member and director who brings a wealth of experience in developing public-private partnerships which will serve our organization and the nation well,” said BENS President and CEO Gen. Joseph Votel.

About a month later in Feb. 2021, Gerencser spoke with ExecutiveBiz in a combined Executive Spotlight interview with Gen. Votel to discuss the release of BENS’ “Commission on the National Response Enterprise: A Call to Action” report that identifies ways to improve national resilience in responding to sustained, nation-wide emergencies like the COVID-19 pandemic.

“My bumper sticker for our Commission is that we have to establish a whole national response that engages government, business and society. My message to our readers is to come join us; be part of BENS. We have 450 executives from all kinds of industries and our capital is the knowledge of our members.

We are self-funded and provide important services and advice free to our government partners to help solve national security issues. We have great leadership and new ideas. We’re doing big things like this Commission and we’ll do bigger things going forward.“

Executive Mosaic congratulates Mark Gerencser on his fourth Wash100 Award. His commitment to improve our nation’s response to engage all aspects of our federal sector demonstrates the elite level of excellence that Gerencser works to achieve for our nation’s security and prosperity.