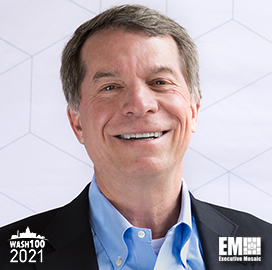 Executive Mosaic is pleased to name George Wilson, president of ECS Federal, as an inductee into the 2021 Wash100 Award for his continued efforts to drive expansion of the company’s footprint in the government contracting sector with contract awards, acquisitions, partnerships and executive hires.

This marks the fourth consecutive Wash100 Award for Wilson. His previous win highlighted his leadership, vision and innovation, having led the information technology service management company as it won several contracts relating to cybersecurity, IT modernization and emerging technologies.

“George Wilson is every founder“™s dream executive. George was brought in to run and scale ECS where he has done effectively and is culminating in their pending acquisition,” said Jim Garrettson, CEO of Executive Mosaic and founder of the Wash100 Award. “George, who will remain president and CEO, should bring ECS up and over the billion dollar mark this year. That should make ASGN, his parent company, very happy.”

In April 2020, ECS Federal secured a potential 10-year, $13.4B Air Force IT services contract and will be overseen by ECS’ joint venture with Eminent IT while the second is for developing prototypes of integrated artificial intelligence and platforms in support of the Army.

Other awards include an $85.4M Army contract to research and develop AI algorithms, an other transaction agreement with the Navy for a cloud-based technology prototype development in support of the Defense Health Agency’s (DHA) data consolidation efforts, and a $28.8 million Marine Corps contract for IT service and support.

“ECS is excited to support NIWC and DHA in this effort, helping to improve continuity of care while providing significant cost savings for DHA and its stakeholders,” said Wilson.

Wilson has also overseen the company’s efforts to broaden its partnership with technology companies and expand offerings. In March 2020, ECS teamed up with Cipherloc to distribute the encryption technology products made by the latter’s QuantaNova division to federal civilian, defense and commercial customers. ECS will also market Google Maps and Google Analytics 360 cloud services as part of its agreement with the Google Cloud Platform finalized in April.

The partnership between ECS and ServiceNow Elite partner Integrated Solutions Management made in November progressed to ISM being acquired by ASGN, the parent organization of ECS, for an undisclosed sum to expand ECS’ federal digital service offerings. Wilson commented the deal aligns with the company“™s organic efforts to grow ServiceNow support work.

“To now acquire ISM, a strategic partner, and add one of the very few Elite ServiceNow providers to our team is a very compelling service offering. We look forward to working closely together on larger and even more complex system- and enterprise-level digital accounts,” Wilson explained.

In another push for increased offerings to federal government customers, ASGN bought Skyris in October. The geospatial intelligence company and its portfolio of geospatial and open source intelligence and data analytics will be integrated into ECS“™ mission solutions business unit.

“The demands and data requirements of the intelligence community continue to accelerate. As a result, the need for cleared remote sensing and data-science-related expertise outweighs the available workforce,“ said Wilson.

ECS also welcomed several executives under Wilson’s leadership. The company named Pamela Rothka, a more than two-decade corporate finance leader, as chief financial officer in August, and appointed Aaron Burciaga, former director at HCL Technologies, as senior director of AI and analytics. The two executives bring to ECS expertise and experience from serving in their respective industries, according to Wilson.

Other executive movements seen in the company are the appointment of Imran Bashir, chief technical officer of cloud computing and vice president of emerging technologies, to lead ECS’ Cloud Center of Excellence 2.0 Initiative in September, and the promotion of John Heneghan to chief operating officer and Giles Kesteloot to chief strategy officer earlier this year.

Under Wilson“™s leadership, ECS was named on CRN“™s Managed Service Provider 500 list, under the Security 100 category, for its cybersecurity initiatives, and was recognized as the first Certified Analytics Professionals Preferred Employer in the federal services industry.

Wilson has been with ECS since 2011, joining the company as chief strategy officer and then being promoted to president and CEO after three years. He leads ECS as it provides government and industry customers with technologies in support of their cloud deployments and digital modernization efforts, as well as AI and machine learning initiatives.

Executive Mosaic congratulates ECS Federal and George Wilson on his fourth consecutive Wash100 Award recognition. Wilson“™s efforts to continue to expand the company footprint in the GovCon sector positioned him as an executive who could be a significant influence in 2021.