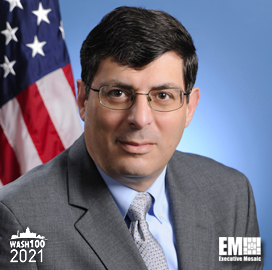 Executive Mosaic is pleased to introduce Christopher Scolese, director of the National Reconnaissance Office (NRO), as a recipient of the 2021 Wash100 Award, the top prize in all of government contracting (GovCon), for his leadership in the COVID-19 pandemic response and relief as well as the advancement of U.S. space exploration and development of IT technology capabilities.

This is his second consecutive Wash100 Award. Scolese was named to his current role in 2019 after spending time in leadership positions at NASA and the U.S. Navy. He previously served as the head of the Goddard Space Flight Center along with its team of professionals that work to drive NASA’s space exploration efforts.

Under Scolese’s leadership, the NRO was able to stand up a COVID-19 Command Center in Mar. 2020 to handle agency-wide pandemic response efforts. NRO had the lowest number of reported positive COVID-19 cases among the intelligence community entities.

“Due to the incredible efforts of our people and partners, the NRO’s systems maintained 100 percent of their capabilities throughout the COVID-19 pandemic,” said Scolese.

NRO was also able to drive efforts under its internship program and deliver the last nine out of 27 technologies that will serve as part of the Future Ground Architecture (FGA) 2.0. The agency also conducted six launches to deliver a total of 12 payloads over the past year, including NROL-129 which served as the first dedicated NRO mission from NASA’s Wallops Flight Facility in Virginia.

The mission, which launched on July 15th aboard Northrop Grumman’s Minotaur IV rocket, also served as the vehicle’s first mission at the Wallops site since 2013.

“NROL-129 represents a collaboration between the NRO and our industry partners to design, build, launch and operate a system of satellites that will demonstrate revolutionary capabilities of value to the nation and our allies,” Scolese noted.

“Despite facing challenges in 2020, we have found new and better ways to collaborate with our partners from a distance, relentlessly pursuing our mission and denying sanctuary to our adversaries.”

The mission was followed by NROL-44, which United Launch Alliance’s (ULA) Delta IV Heavy rocket carried from Cape Canaveral Space Force Station (CCSFS) in Florida on Dec. 10. Other NRO launches conducted out of the station include NROL-101 and NROL-8.

In Jan. 2021, the agency launched NROL-151 as part of the “Don’t Stop Me Now” mission with Rocket Lab. The launch represents NRO’s first dedicated mission with the New Zealand-based space company under a Rapid Acquisition of a Small Rocket agreement.

Scolese has spoken about the value of satellites and the need to leverage global data over the past year. In an August webcast for the 2020 Small Satellite Conference, Scolese said that NRO is working on taking advantage of small satellites to support future space exploration and research initiatives. He noted that cube satellites are key to helping the agency “respond more quickly”.

“Smallsats can provide lots of opportunities to do science, to provide information for the intelligence community and to allow us to develop technologies and capabilities.” said Scolese. “You can get something up in one to three years or faster, and the price of launch is lower because you can rideshare. We’ll be able to do more with smaller satellites.”

Scolese also spoke about how machine learning and artificial intelligence can help agencies as well as commercial and international entities filter large amounts of data and execute smarter approaches.

“Basically, the whole Earth is being covered almost all the time now when you look at the combination of what’s out there,” he noted during a panel session in September. “Technology is allowing us to do some things we didn’t think of before.”

You have TEN votes waiting to be submitted for the 2021 Wash100 Vote Standings to determine the most significant executives of consequence to the government contracting (GovCon) sector and YOUR votes could be the difference between first and second place. Visit Wash100.com to cast your ten votes before April 30th to ensure your favorite executives receive the recognition they deserve for their contributions to the GovCon sector and federal marketplace through 2021.

Executive Mosaic congratulates NRO and Christopher Scolese on his 2021 Wash100 Award. His efforts to drive space exploration, IT technology capabilities and COVID-19 relief demonstrates the success and leadership in the GovCon sector that the Wash100 Award is meant to represent.