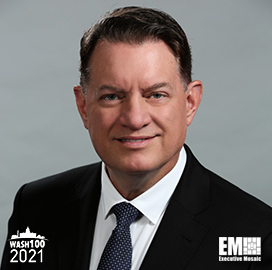 Executive Mosaic is honored to announce Rick Wagner, president of Microsoft’s federal arm, as a recipient of the 2021 Wash100 Award for his leadership and efforts to drive digital transformation as federal agencies push their adoption of the latest emerging technologies.

This marks the fourth consecutive Wash100 Award for Wagner. Previously, Wagner had received a 2020 Wash100 Award for leading efforts to drive cybersecurity, intelligence and other emerging technologies for the company and federal agencies.

Visit Wash100.com to cast a vote for  Rick Wagner as the most significant executive of consequence to the GovCon sector. Cast your TEN votes TODAY to advocate your favorite leaders in the federal and government sectors. The elite leader with the most votes by April 30th will be recognized by the GovCon community as the industry’s most influential member.

In the first of a two-part series he posted in Nov. 2020, Wagner said Microsoft Federal was formed in July as a 3,000-member organization. He said the new organization reflects the company’s “commitment to, and investment in, federal government agencies and the specialized partners who join us in supporting their mission-critical work.”

Wagner highlighted federal agencies and their adoption of cloud, artificial intelligence and other digital capabilities to ensure continuity of operations and delivery of citizen services amid the COVID-19 pandemic. In the second part, he discussed Microsoft Federal’s advancements in delivering technology platforms to federal customers to help them meet their mission requirements.

“As the world around us continues to evolve in unpredictable ways, we’re seeing dramatic shifts in how the federal government is embracing technology with speed and agility to achieve objectives, better serve citizens, and further efficiency and effectiveness,” he wrote.

“The government customers I talk with are focused on digital transformation and seizing opportunities at the accelerated pace required to deliver modern mission outcomes,” Wagner added.

In a Nov. 2020 blog post, Wagner said the company will compete to build, deploy and operate systems across multiple domains in support of the U.S. Air Force’s Advanced Battle Management System (ABMS) through its spot on a potential $950 million indefinite-delivery/indefinite-quantity (IDIQ) contract.

Microsoft was one of the 24 vendors that won spots on the IDIQ contract in early November to develop, test and integrate new capabilities for ABMS as part of the Joint All Domain Command and Control (JADC2) program.

Wagner said Microsoft Federal will support the ABMS program by using the Azure Government cloud as the underlying tech platform to provide the “ability to fuse data from disparate sources to generate a more robust operating picture and operations across the battlespace.”

In August of last year, Microsoft announced that it authorized Carahsoft to distribute its Azure suite of cloud computing platforms through the latter’s government contracts and reseller partners. The partnership also includes government market distribution of Microsoft 365, Power Platform and Dynamics 365.

“We look forward to working with Carahsoft to expand the reach of Microsoft Azure and help accelerate government cloud adoption and migration initiatives,” said Wagner.

Prior to Microsoft, he served as president of ManTech International’s mission cyber and intelligence solutions group. His career at ManTech included time as chief operating officer of the MCIS group and senior VP and general manager for the advanced technology solutions division.

Before ManTech, was chief strategy officer at TASC, which Engility acquired in 2015. He also held program management roles at Lockheed Martin, Raytheon and the Naval Surface Warfare Center.

Executive Mosaic congratulates Rick Wagner for his 2021 Wash100 Award. His leadership and consistent contributions to the federal and GovCon sectors demonstrate the level of success and excellence that has become synonymous with the Wash100 Award.