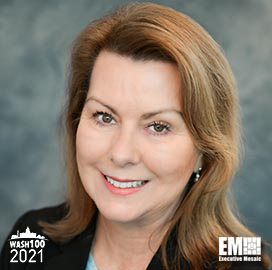 Executive Mosaic is pleased to introduce Jill Singer, vice president of Defense and National Security for AT&T’s public sector business and First Responder Network Authority (FirstNet) program, as a recipient of the 2021 Wash100 Award for driving the advancement of 5G capabilities in the federal and commercial sectors as well as leading FirstNet’s expansion across the U.S. military services.

This marks Singer’s sixth Wash100 Award in the historic eight-year history of the most prestigious award in government contracting (GovCon). Executive Mosaic recognized Singer for her efforts to advance AT&T critical missions in technology modernization and advancement in 2020.

A GovCon Expert and member of the Potomac Officers Club, Singer was named to her most recent role in June 2020 after more than three decades of leading information technology and transformation efforts in the federal sector.

Under Singer’s oversight, the FirstNet team secured a task order from the U.S. Army to install 3,200 FirstNet telecom lines at 72 of the service branch’s installations in the U.S. and Puerto Rico.

In September, AT&T announced its partnership with the U.S. Air Force to provide Networking-as-a-Service and 5G support to USAF bases in Alaska, Colorado and Nebraska.

AT&T has completed its 5G design concept for all three bases to support the Air Force’s Enterprise IT-as-a-Service and 5G testing efforts. The company expects to roll out its 5G service at the installations by the end of 2021.

Speaking on AT&T’s 5G initiatives, Singer said that the company has begun efforts to launch 5G initiatives across more than 100 U.S. markets and 35 cities.

In a guest piece for Executive Mosaic’s GovCon Expert program, Singer wrote that she believes in 5G’s capacity to significantly alter business, consumer and mission experiences.

The national security and government implications of 5G mirror those on the private sector side and would bring stricter security requirements and a more nuanced target landscape, said Singer.

“It’s an exciting time to be in this industry: at the dawn of the revolutionary technology capabilities 5G can help enable for sustainable advantage across the global theatre of operations.”

Aside from its work with the Department of Defense over the past year, AT&T also secured key opportunities in the civilian, scientific and intelligence sectors. In November, AT&T landed a $311 million award to help modernize the National Oceanic Atmospheric Administration’s (NOAA) telecom systems, wireline networks and unified communications infrastructure in preparation for 5G rollout activities.

AT&T also secured a potential $92 million award in December to deploy FirstNet services to the FBI to support the agency’s day-to-day operations. Network services under the contract could potentially expand to support the U.S. Marshals Service, Drug Enforcement Administration and Bureau of Alcohol, Tobacco, Firearms and Explosives.

In the same month, AT&T and the Department of Veterans Affairs (VA) signed a deal to provide free health care teleconferencing services to veterans as part of the Anywhere to Anywhere initiative. AT&T supports the department’s VA Video Connect health communications service.

You have TEN votes waiting to be submitted for the 2021 Wash100 Vote Standings to determine the most significant executives of consequence to the government contracting (GovCon) sector and YOUR votes could be the difference between first and second place. Visit Wash100.com to cast your ten votes before April 30th to ensure your favorite executives receive the recognition they deserve for their contributions to the GovCon sector and federal marketplace through 2021.

Executive Mosaic congratulates AT&T and Jill Singer on her 2021 Wash100 Award. Her contributions to the future of 5G technology in the federal sector as well as the IT capabilities of the U.S. military make Singer one of the most significant executives to the federal landscape in 2021 and beyond.