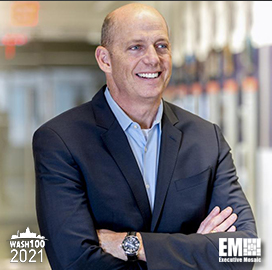 Executive Mosaic is honored to recognize PAE President and CEO John Heller as an inductee into the 2021 edition of the Wash100 for leading PAE’s transformation from a private equity-backed company into a publicly listed company and expansion in the government services arena through acquisitions and contract wins. This represents his sixth Wash100 award.

“Earning six Wash100 Awards in his eight years of tenure with PAE, John Heller is a stabilizing force that has allowed PAE to go from a privately held company on to a SPAC holding and then to an IPO,” said Jim Garrettson, CEO of Executive Mosaic and founder of the Wash100 Award. “John’s combination of financial savvy, consistent performance and leadership confidence has helped fulfill the financial metamorphosis of PAE with a promising outlook for 2021.”

Under Heller’s leadership, PAE went public in Feb. 2020 upon the completion of its merger with The Gores Group-sponsored special purpose acquisition company Gores Holdings III. Platinum Equity, the former majority owner of PAE, and the private equity firm’s affiliates collectively own 23 percent of the publicly traded government services contractor following the deal’s closure.

“Although we are now a public company, nothing changes with respect to our commitment to our customers, our exceptional employees and our focus on building on our nearly 65-year tradition of being a trusted partner to the U.S. government and our allies worldwide,” Heller said.

Before 2020 ended, PAE acquired intelligence analysis service providers Centra Technology and Metis Solutions in a pair of cash acquisitions valued at $208 million and $92 million, respectively. Heller said both transactions sought to expand the Falls Church, Virginia-based company’s footprint in both the intelligence and national security markets.

The prior calendar year also saw PAE retained as the winner of a seven-year, $400 million global training assistance contract from the Department of Justice after the Government Accountability Office rejected a bid protest by another company in April 2020.

“This contract expands on the outstanding growth our Global Mission Services team has brought to the organization in the past few years and provides an ongoing opportunity to showcase our strong performance,” Heller said at the time of award announcement.

In May 2020, the Customs and Border Protection agency selected PAE to provide national aviation maintenance and logistics services under a recompete contract potentially worth $1.6 billion over 10 years.

In another partnership, PAE will work with Alion Science and Technology to help the U.S. Navy modernize a combat training system under an $896 million task order the service branch awarded to Alion.

In a November interview with Inside Defense, Heller expressed optimism over President Joe Biden’s foreign policy vision as the company looks to grow its work with the State Department.

Executive Mosaic congratulates John Heller and the PAE team for their selection to receive this award. His significant contributions to the government contracting (GovCon) sector continue to demonstrate the level of excellence that the Wash100 Award was created to recognize.