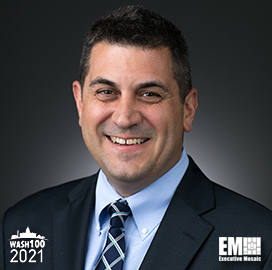 Executive Mosaic is honored to announce that Todd Probert, president of National Security and Innovative Solutions (NSIS) for CACI International, has been named a recipient of the 2021 Wash100 Award for his leadership and vision to advance military capabilities for the modern-day warfighter as well as drive technical capabilities to protect and innovate for the U.S. national security community.

Probert has received the most prestigious award in all of government contracting (GovCon) for the first time in his long industrious career as one of the most significant members of the federal landscape.

Following his tenure as the Group President of Defense and Security for CAE, Probert sought after an opportunity to rejoin the national security community and became CACI’s president of NSIS in Aug 2020.

In his current role, Probert is responsible for the oversight of CACI’s advances in its technology and innovation operations to address the company’s most challenging issues to assist its customers to “meet their missions.”

He oversees the delivery of advanced technology and innovation in C4ISR, RF and free-space optical communications, spectrum management, and cyberspace operations as well as electronic warfare (EW), signals intelligence (SIGINT), and communications missions in order to dominate the electromagnetic spectrum.

The company will provide enterprise technology and support the full range of case types for DHS and their components. In addition, the contract award will expand the list of government customers that CACI can provide national security investigations for, which includes the intelligence community and the Department of Defense (DOD).

In addition, Probert has been an advocate for the advancement of U.S. warfighter capabilities to ensure our national security is protected by the soldiers and military leaders with the technology they need to drive innovation and information is now considered one of the most significant weapons in all of warfare.

Probert has a keen eye on the advancements of signals intelligence and technology, 5G capabilities as well as CACI’s lesser known investments in unmanned systems, virtual reality (VR) technology, augmented reality (AR) and its impact on the development of battlefield mission system support.

Prior to his time with CACI, Probert led more than 8,000 global employees in a wide range of senior leadership roles with Raytheon. Most recently, he served as the vice president of its Command and Control, Space and Intelligence business. He was responsible for the development and delivery of complex engineering solutions and agile command and control/situational awareness systems for the intelligence community, defense, and civil customers.

In addition, Probert also served as the vice president of Business Development and Strategy for Honeywell Technology Solutions during his 12 year stint with the organization. His goals were to grow the company’s business and oversaw its divisions of sales, marketing, pricing, and proposal production efforts.

You have TEN votes waiting to be submitted for the 2021 Wash100 Vote Standings to determine the most significant executives of consequence to the government contracting (GovCon) sector and YOUR votes could be the difference between first and second place.

Visit Wash100.com to cast your ten votes before April 30th to ensure your favorite executives receive the recognition they deserve for their contributions to the GovCon sector and federal marketplace through 2021.

Executive Mosaic would like to congratulate CACI and Tood Probert for receiving the coveted Wash100 Award for the first time as a part of the 2021 class of recipients.