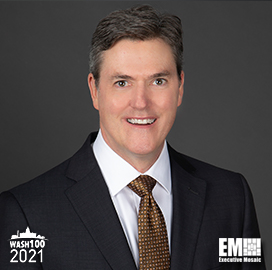 Executive Mosaic is honored to introduce Michael LaRouche, president of National Security and Space at Science Applications International Corp. (SAIC), as a recipient of the 2021 Wash100 Award. This marks the first Wash100 Award for LaRouche.

LaRouche, formerly executive vice president and general manager of SAIC“™s national security group, assumed his current role as sector president on Oct. 31st as part of the company“™s move to reorganize its business structure into two segments – defense and civilian business and national security and space business ““ to accelerate its business strategy and advance growth priorities in such areas as digital transformation, digital engineering and space.

As sector president, he oversees the company“™s space business and delivery of support services to the intelligence community, U.S. Air Force, combatant commands and other components and agencies within the Department of Defense. Under his leadership, SAIC has secured several multimillion-dollar contracts from services and agencies across DOD.

SAIC ended fiscal year 2020 on a high note when it booked $1.1 billion in national security contract wins during the fourth quarter, bringing the total full-year contract wins in the category to $2.8 billion. The awards included the Air Force“™s Common Computing Environment contract or Cloud One valued at more than $727 million and a $265 million classified space contract.

LaRouche said the company“™s performance in the cloud, space and intelligence domains since it completed the Engility acquisition has presented opportunities to advance business growth initiatives.

“Our employees“™ innovation and dedication to solving our customers“™ challenges continues to be our differentiator,“ he added.

In May of last year, SAIC reported more than $650 million in contracts during the first quarter of FY 2021 to support national security customers such as DOD and the IC.

“SAIC responded quickly to address the disruption and uncertainty caused by COVID-19 with innovative new approaches,“ LaRouche said then. “With the contract awards this quarter, we are extending SAIC“™s ability to help our customers adapt to change and meet their emerging needs with engineering, integration, space, and IT modernization services and solutions.“

In August, the company said it logged more than $286 million in contracts during the second quarter of FY 2021 to help national security customers in their systems engineering and integration work.

“While we“™ve maintained a traditionally strong SE&I base of awards, our classified, space, and defense customers are now also coming to us for a broader set of solutions, including digital engineering, analytics, software development, and IT modernization. We are excited to expand the scope of services we deliver to these customers and collaborate on their digital transformation,“ he added.

SAIC will also work with the Air Force to support the Joint All Domain Command and Control program under a potential $950 million multiple-award contract announced in July.

Early last year, the company announced its collaboration with the University of Massachusetts Lowell to develop an economic development campus in Massachusetts. The Northstar Campus would host small business mentoring, pitch competitions and defense research opportunities.

“Partnering with UMass Lowell opens doors for our professionals to seamlessly work beside the leading minds in academia and government to address emerging challenges in national defense,“ said LaRouche.

In February 2020, LaRouche was appointed to the Intelligence and National Security Alliance’s board of directors. He has supported the alliance for several years as a member of the nonprofit“™s Technology and Innovation Council.

“Now more than ever, we all need to strengthen the partnership between government and industry,“ said LaRouche, who cited INSA“™s role in fueling that partnership to advance people and platforms needed to protect and defend the country.

Before SAIC, he spent more than a decade as a vice president at Raytheon prior to the company“™s merger with United Technologies Corp. His industry career has also included leadership roles at Lockheed Martin and Hughes Network Systems.

Executive Mosaic congratulates Michael LaRouche for his 2021 Wash100 Award. His vision to advance SAIC’s IT modernization efforts across the federal sector showcase the leadership and forward thinking mentality that has established LaRouche as a Wash100 Award recipient this year.

Visit Wash100.com to cast a vote for Michael LaRouche as the most significant executive of consequence to the GovCon sector. Cast your TEN votes TODAY to advocate your favorite leaders in the federal and government sectors. The elite leader with the most votes by April 30th will be recognized by the GovCon community as the industry“™s most influential member.