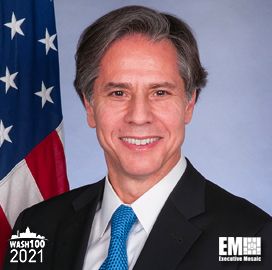 Executive Mosaic is pleased to present Antony Blinken, secretary of State for the Biden administration, as a recipient of the Wash100 Award, the most respected and coveted award in all of government contracting (GovCon), for the first time in his long career in the federal sector.

Blinken has received a 2021 Wash100 Award for his leadership and initiatives to protect U.S. national security interests, develop international alliances and address the challenges of the nuclear agreement between the U.S. and Iran.

On Jan. 26th, 2021, Blinken was confirmed by the U.S. Senate as the next Secretary of State in a 78-22 vote. Previously, he had served as the former deputy secretary of state for the Obama administration after succeeding fellow 2021 Wash100 Award recipient and current CIA Director William Burns, who retired from the position in Dec. 2014.

After the Senate confirmed his new post as Secretary of State in Jan. 2021, Blinken revealed his plans to review U.S. policy and enforce a tougher approach toward the nation’s rivals across the globe, including North Korea, Russia and China.

It was reported in Feb. 2020 that Blinken seeks to strengthen and extend the agreement between the U.S. and Iran to curb its nuclear program entirely. Blinken expressed his hope that the talks would also improve collaboration with our nation’s allies and partners to strengthen the Joint Comprehensive Plan of Action (JCPOA) and push ballistic missile development in the future.

Most recently, Blinken collaborated with fellow 2021 Wash100 Award recipient and Secretary of Defense Gen. Lloyd Austin on an opinion piece for the Washington Post that detailed the drive that both secretaries have to develop international alliances into “force multipliers” for the U.S.

“No country on Earth has a network of alliances and partnerships like ours,” Gen. Austin and Blinken said in their co-op article. “It would be a huge strategic error to neglect these relationships. And it’s a wise use of our time and resources to adapt and renew them, to ensure they’re as strong and effective as they can be.”

In the article, Bliken and Gen. Austin also revealed that both men are scheduled to visit South Korea and Japan to “lay out why alliances are vital to our national security and how they deliver for the American people.”

They emphasized that specific alliances with Japan and South Korea would heavily contribute to the nation’s security and prosperity. They also stressed the importance of determining the best response to threats related to global security issues, climate change, cybersecurity and health security.

In addition to his experience in the Obama administration, Blinken also held senior foreign policy positions with the Clinton and Bush administrations as well. He co-founded WestExec Advisors alongside Michèle Flournoy, who was a runner up for the role of Defense Secretary earlier this year, Sergio Aguirre and Nitin Chadda in 2017. Blinken is a member of the Council on Foreign Relations (CFR).

Executive Mosaic offers its kindest congratulations to Antony Blinken for becoming Secretary of State for the nation and receiving his first Wash100 Award win. His leadership and commitment to protecting our nation’s national security demonstrates the highest level of excellence that the Wash100 Award has recognized in our elite leaders for the last eight years and beyond.