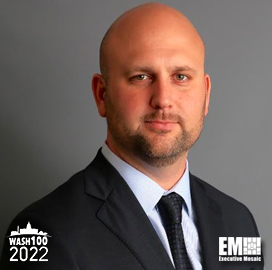 Steve Escaravage, senior vice president of Booz Allen Hamilton, has received a 2022 Wash100 Award, the most prestigious award in government contracting (GovCon), for leading the development of artificial intelligence technology and tools as well as driving new capabilities to address the global race for AI superiority in the current and future digital battlefield.

Executive Mosaic is pleased to recognize Escaravage as a first-time Wash100 winner. Visit Wash100.com to cast a vote for Steve Escaravage as one of your TEN votes to advocate for your favorite leaders in the federal and government sectors.

Most recently, Escaravage took part in an Executive Spotlight interview discussing the research that he and his team are focused on to advance artificial intelligence tools and solutions for the complex issues for federal agencies and Booz Allen’s clients in the defense and civilian sectors.

“It’s important to have one foot in the research, especially given how fast innovation moves in this field. Booz Allen stays up to date on AI innovation through a combination of partnerships and dedicated experts,” said Escaravage.

“We have a team at Booz Allen that performs tech scouting and environmental scanning. That’s all they do, day in and day out, and they are extremely proficient at identifying potential disruptive technologies.”

Previously, Escaravage has highlighted the importance of an intensive ethical approach to continue to develop and implement artificial intelligence tools. Most notably, he has discussed the final report of the National Security Commission on Artificial Intelligence (NSCAI), which he described as profound due to the potential for the U.S. to lose its technological edge in AI.

“When we talk about responsible AI, it all comes down to trust. As the user and the one interacting with AI, you have to be able to trust the design process, the designer, as well as how it was deployed and tested. We’re going to need to develop ways to build trust and create safeguards,” Escaravage explained.

Recently, Steve Escaravage contributed a feature to VentureBeat discussing the necessary steps that government officials and IT leaders need to enact to drive AI tools and development out of ‘pilot purgatory.’

In the feature, he discussed the critical importance of AI to the future of national security for the U.S. as well as the future demands of the digital battlefield and electronic warfare. He also expressed his concern how many organizations can develop AI capabilities in a non-production, innovation laboratory, but the real test is fielding AI in real-world environments.

During his Executive Spotlight interview with ExecutiveBiz, Escaravage said: “We can do it. It’s been done before. We just need a sense of urgency and sustained investment to get it done. I just think there’s incredible opportunity for this technology, and I do believe we’ve seen enough to have confidence that it provides transformational potential.”

We do not seem to be moving fast enough, though, as a nation,” Escaravage expressed. “As a general public, the court of public opinion needs to be championing this so the government has the support to move forward. The future is going to be awesome. We could get there sooner if we just make a commitment and start leaning forward.”

Steve Escaravage joined Booz Allen back in 2000 and has served in a range of positions with the company for more than 21 years, including vice president and his current role as a senior vice president since April 2018.

Executive Mosaic is proud to recognize Booz Allen and Steve Escaravage for being named a 2022 Wash100 Award recipient. As a first time winner of the most coveted award in GovCon, Escaravage has demonstrated a level of success and recognition that can only be recognized by the Wash100 Award and the GovCon community.

Visit Wash100.com to vote for Steve Escaravage and who you believe deserves the recognition as the most significant leader to the GovCon community and federal landscape.