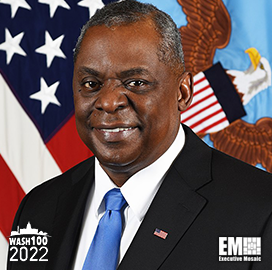 Executive Mosaic is honored to announce Defense Secretary Lloyd Austin as an inductee into the 2022 Wash100 — the annual list of public and private sector leaders who are at the forefront of trends and events that shape government contracting activity. This marks the second consecutive year that he’s been selected to receive the most prestigious award in GovCon.

Austin, a retired Army general who assumed the top Department of Defense civilian post in January 2021, has prioritized initiatives to defeat COVID-19, maintain deterrence against nation-state threats and build a cooperative national security approach since he took office.

“We need leaders like Lloyd Austin who understand that our military is only one instrument of our national security. Keeping America strong and secure demands that we draw on all our tools. He and I share a commitment to empowering our diplomats and development experts to lead our foreign policy, using force only as our last resort,” President Joe Biden wrote in an op-ed for The Atlantic.

In his first key policy speech as Pentagon chief, Austin said that the country’s integrated deterrence strategy must embody cooperation, innovation and coordination across all domains of potential conflict.

He signed a directive in June 2021 that put forward department contributions to a whole-of-government approach to address security risks from China, which he and other defense officials referred to as the No. 1 “pacing challenge” for the U.S. military.

“The efforts I am directing today will improve the department’s ability to revitalize our network of allies and partners, bolster deterrence and accelerate the development of new operational concepts, emerging capabilities, future force posture, and a modernized civilian and military workforce,” he said in the June 9 release.

In the artificial intelligence realm, Austin vowed to ensure DOD will apply its “Responsible AI” principles to develop and implement the technology for military operations. He said at the Global Emerging Technology Summit that the department must create new career paths and incentives and incorporate technical skills into its basic training programs to prepare itself for AI opportunities and challenges.

Last year also saw DOD’s top official support the White House’s troop withdrawal and evacuation operations to end a 20-year war in Afghanistan and told the Senate Armed Services Committee at a post-drawdown hearing in September that President Biden followed the advice of his military advisers in carrying out the exit.

In October, the Pentagon released its Climate Risk Analysis report to comply with requirements under the Executive Order on Tackling the Climate Crisis at Home and Abroad.

“Competitive advantage in the future will go to those who can fight and win in this rapidly changing strategic and physical environment. To deter war and protect our country, the department must understand the ways climate change affects missions, plans and capabilities,” Austin said.

Biden on Dec. 27 signed into law a $770 billion defense policy bill for fiscal year 2022 that allocates 5 percent more in funds over the previous year and $25 billion more than the amount the president requested. The National Defense Authorization Act includes several measures to accelerate departmentwide deployments of AI and other emerging technology and increase collaborative work with industry to expand defense innovation programs.

DOD, which has operated under a continuing resolution since the government’s current fiscal year began Oct. 1, cannot start new contracts or programs because the stopgap bill freezes defense spending at FY 2021 levels.

Austin urged Congress in December to fully fund the government as he believes an extended continuing resolution will harm military readiness and modernization efforts.

“It would misalign billions of dollars in resources in a manner inconsistent with evolving threats and the national security landscape, which would erode the U.S. military advantage relative to China, impede our ability to innovate and modernize, degrade readiness, and hurt our people and their families,” the defense secretary said of the possible impacts of a full-year CR.

In his December Reagan National Defense Forum speech, Austin outlined a series of steps DOD will take to transform how it does business with industry and help companies bridge the “valley of death.”

“Join with us. Work with us. And help keep our country strong,” he said in a call to action to the private sector.

Executive Mosaic congratulates Lloyd Austin and the DOD organization for their selection to receive this year’s Wash100 Award. Cast a vote for the Pentagon chief as one of your favorite leaders who shape GovCon from all angles of government and business.