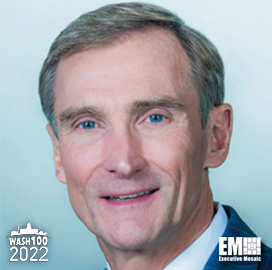 Executive Mosaic is honored to present Roger Krone, chairman and CEO of Leidos, as a recipient of the 2022 Wash100 Award and the only nine-time winner of the most prestigious award in all of government contracting (GovCon).

“Roger Krone is the winningest member of the GovCon community,” said Jim Garrettson, CEO of Executive Mosaic and founder of the Wash100 Award. “He has distinguished himself as the only winner to qualify for all nine-years that the Wash100 Award has recognized the elite members of our industry.”

For his ninth consecutive Wash100 Award win, Executive Mosaic has recognized Krone for his leadership and drive for company growth that led to significant acquisitions in 2021 as well as company growth of more than $4.7 billion that drives Leidos into the year to come.

Visit Wash100.com to cast a vote for Roger Krone as one of your TEN votes to advocate for your favorite leaders in the federal and government sectors.

“The Wash100 Award has differentiated itself by presenting the award to its winners not based on past performance, but based on each winner’s potential to succeed and drive the industry forward in the year to come,” Garrettson continued. “Roger Krone is the only executive in Wash100 history to receive the award every year since its inception, which displays the highest level of leadership and success that Roger has consistently demonstrated for Leidos and the GovCon community.”

Amid the challenges posed by the pandemic, Leidos continued to report strong financial results in 2021. During the third quarter of its fiscal year 2021, the Reston, Virginia-based information technology and defense contractor reported $3.5 billion in revenue, reflecting a growth of 7 percent from the prior-year period.

Leidos reported $4.7 billion in Q3 FY 2021 net bookings with a book-to-bill ratio of 1.4; a 16 percent increase in adjusted earnings before interest, taxes, depreciation and amortization; and ended the quarter with a total backlog of approximately $34.7 billion, with $7.3 billion of that funded.

“The third quarter marked another strong quarter for Leidos, with record levels of revenues, adjusted EBITDA, non-GAAP diluted EPS, and backlog. Our success is the direct result of building a business portfolio focused on vital missions and a workforce that is motivated to enhance those missions through technology, engineering, and science,” said Krone.

In August 2021, Leidos posted strong Q2 financial performance with $3.4 billion in revenue, up 18 percent from the same period the previous year.

“As I look at the quarter, four messages stand out,” Krone said during the earnings call. “First, our strong financial results demonstrate that our strategy is working. Second, our business development momentum is setting the stage for future growth. Third, we are effectively deploying capital to broaden our offerings in attractive markets. And fourth, we are building an engaged and effective workforce.”

In early 2021, he noted that Leidos will continue to pursue mergers and acquisitions amid the consolidation and competition for big information technology contracts within the federal market.

“For us, now is not a time to become risk-averse,” Krone said at a conference, adding that Leidos will look to further expand offerings through complementary M&A deals that could provide a strategic advantage to the company.

“I think we are OK with overall corporate size, but there are clearly markets where we would like to have a bigger presence,” he said.

The company continued to expand in 2021 through acquisitions.

Leidos started the year with the completion of its $215 million cash acquisition of 1901 Group, a provider of managed information technology and cloud platforms in public and private sectors.

“The addition of 1901 Group allows us to work together and leverage their impressive capabilities across the enterprise,” Krone said. “We are thrilled to incorporate their managed services and cloud computing techniques to provide our customers with the tools they need for digital modernization.”

At the company’s Q3 FY 2021 earnings call, Krone described 1901 as a real “energizer” for the company’s digital transformation work.

“We have used the talent and 1901 really to derisk our engine ramping and staffing. They have an as a service platform, and have a culture that just attracts people,” he added.

In May 2021, Leidos closed its $380 million purchase of Gibbs & Cox nearly three months after it first announced the transaction.

Krone said the Gibbs & Cox acquisition will help Leidos expand its maritime business and add marine engineering, naval architecture, 3D modeling and design and other services to the set of capabilities the company offers to customers.

“In addition to being positioned on the front end of next generation vessels, the business combination provides significant tailwinds for participation in the maritime unmanned market and accelerates Gibbs & Cox expansion in the undersea domain,” Krone told analysts during an earnings call.

During the Q3 earnings call, he said that “Gibbs & Cox on a stand-alone basis continue to have strong support from the Navy on the new frigate contract and the new destroyer contract. … They bring a level of systems engineering and platforms that we have wanted to have for a long time.”

Leidos unveiled efforts to fight the pandemic and one of those was the company’s “Move the Needle” campaign that was launched in July and ended in October. The initiative sought to promote and encourage employee vaccinations against COVID-19. The company offered at least $1 million in total compensation to 10 randomly selected employees as part of the sweepstakes.

“For more than 50 years, Leidos’ mission has been to make the world safer, healthier and more efficient. Today we are doubling down on that charter,” said Krone.

“Through this campaign, we are investing in our people and providing a tangible incentive to save lives. If it encourages even one person to get the vaccine, it’s money well spent,” he added.

In December, Krone was recognized with the Washington Business Journal’s COVID-19 Response Leader Award for his leadership during the health crisis and launch of the company’s Million Dollar “Move the Needle” Sweepstakes.

In an accompanying interview, he discussed the campaign to promote vaccine awareness for Leidos employees, the response it received and how the senior management continues to drive employees to get vaccinated.

Leidos also launched initiatives to combat opioid addiction. In April 2021, the company partnered with the football team Baltimore Ravens for the second consecutive year to increase awareness about the opioid epidemic. As part of the “Tackling Opioid Addiction” campaign, the two organizations pledged to support addiction recovery by making a donation to Oxford House.

In May 2021, the company teamed up with the Milken Institute Center for Public Health to mobilize employers in all industries to address the opioid and concurrent mental health crises.

Krone said then that addressing opioid addiction has been a core part of the company’s community outreach efforts.

“COVID-19 has turned the growing crisis of opioid addiction into a full scale emergency – one affecting millions of Americans and their families,” he said. “Through this new partnership with the Milken Institute’s Center for Public Health we can devote new resources and solutions to not just the opioid epidemic, but the broader range of mental health issues affecting our society.”

As part of its commitment to advancing STEM education, Leidos made a $1 million donation to help the Alabama School of Cyber Technology and Engineering build a new academic and residential facility in Huntsville, Alabama.

“This donation is our commitment to the future,” said Krone. “It also addresses the ongoing need for a 21st century workforce of skilled science and engineering professionals.”

In November 2021, Leidos launched a new initiative called Next Level Leidos, outlining the company’s environmental, social and governance goals for 2030.

Through Next Level Leidos, the company will pursue its sustainability goals through 2030 by focusing on three key areas: cultivating inclusion, advancing environmental sustainability and promoting healthier lives.

“We are proud of our progress to date and are equally dedicated to building a future where our people and technology contribute to a more sustainable world,” said Krone.

“We are a values-based company and Next Level Leidos represents our commitment to being a responsible and engaged corporate citizen,” he added.

“Unlike any other industry award, the Wash100 is presented in advance,” Garrettson emphasized. “We are proud of our consistent track record for choosing winners who can have their contributions recognized by visiting Wash100.com, a veritable ‘who’s who’ of the elite industry executives across the federal government, military and GovCon.”

Visit Wash100.com to vote for Roger Krone and who you believe deserves the recognition as the most significant leader to the GovCon community and federal landscape.