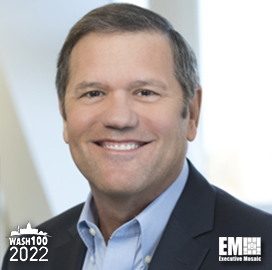 Executive Mosaic is pleased to announce Jim Brinker, president and general manager of Intel’s federal business arm, as an inductee into the 2022 edition of the Wash100 Award for supporting the company’s semiconductor-focused efforts and promoting collaborations with industry partners and government agencies.

This marks the third consecutive Wash100 Award for Brinker. Visit Wash100.com to cast your votes for him and your other favorite leaders in the government contracting sector.

Brinker’s 2021 Wash100 Award was in recognition of his leadership in 5G technology development and other emerging IT innovation aimed at enhancing the capabilities of the federal government. Commenting on Brinker’s previous win, Jim Garrettson, CEO of Executive Mosaic and founder of the Wash100 Award, said, “[Brinker] continues to work very closely with national labs and major GovCon IT providers to forge dynamic new partnerships within the industry.”

In August 2021, Intel was selected by the Department of Defense to work with companies in the semiconductor industry on the establishment of a foundry infrastructure aimed at expanding U.S. access to secure computer processors. Intel, IBM, Cadence, Synopsys and other companies will support DOD’s Rapid Assured Microelectronics Prototypes-Commercial initiative.

Previously, Intel Federal and Qorvo were awarded $172.7 million for the development of novel packaging methods under the second phase of the department’s State-of-the-Art Heterogeneous Integration Prototype program.

Throughout the year, Intel has been making multibillion investments to expand its semiconductor production in response to increasing demands.

The company has announced $3.5 billion in funding to add a capability to manufacture advanced semiconductor packaging technologies at its Rio Rancho campus in New Mexico. The site will accommodate the production of Foveros in addition to memory storage, embedded multi-die interconnect bridge and silicon photonics technologies. The expansion is expected to create 700 high technology positions and thousands of other employment opportunities in the state.

In September, Intel kicked off a $20 billion construction project in Arizona. The investment is for building two new chip factories– called Fab 52 and Fab 62– at its Ocotillo campus, where the company plans to manufacture a range of advanced process technologies. The factories are scheduled to be operational in 2024.

The said investments are in line with Intel’s IDM 2.0 strategy that seeks to help the company advance integrated device manufacturing and achieve product leadership. The new Intel Foundry Services business unit, internal factory network and expanded use of third-party foundry capacity made up IDM 2.0.

Intel also works with the Defense Advanced Research Projects Agency under the Structured Array Hardware for Automatically Realized Applications program. The effort is aimed at increasing domestic manufacturing of structured application-specific integrated circuit platforms that will be equipped into defense electronic systems. The SAHARA program includes collaborations with the University of Florida, Texas A&M University and University of Maryland.

Another DARPA-focused team up is between Intel and Microsoft. The companies will support the agency’s Data Protection in Virtual Environments initiative that seeks to develop a fully homomorphic encryption accelerator.

Aside from DOD, Intel also supports Department of Health and Human Services components.

The company and Leidos look to enhance contact tracing on a Centers for Disease Control and Prevention platform used by states and local governments for secure data sharing.

Intel is also part of a National Institutes of Health program with Google’s cloud computing arm. The NIH All of Us Research Program aims to use the Intel Xeon-powered and Google Cloud-hosted Researcher Workbench platform to provide researchers with access to biomedical information.

In addition, Intel was one of the sponsors of the Potomac Officers Club’s 5G Summit. Brinker joined other notable federal and industry leaders to discuss new programs, priorities and challenges within the integration process of the National Strategy to Secure 5G of the United States.

Brinker has overall responsibility for Intel Federal. He leads its strategy, business development, opportunity capture, program management and finance activities. The executive has been with the company for more than 7 years now.

This year represents the ninth annual Wash100 award selection. The Wash100 is the premier group of private and public sector leaders selected by Executive Mosaic’s organizational and editorial leadership as the most influential leaders in the GovCon sector. These leaders demonstrate skills in leadership, innovation, reliability, achievement, and vision. Visitors to wash100.com can sign in and vote for the executives they believe will have the greatest impact on government contracting in the coming year.