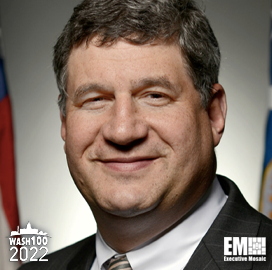 Under Secretary for Acquisition and Sustainment

William LaPlante, nominee for under secretary for Acquisition and Sustainment with the Department of Defense, was been named a 2022 Wash100 Award recipient for his visionary leadership and drive for innovation to revamp U.S. weapons systems to protect our national security interests as well as driving small business growth in the federal sector and the adoption of the latest emerging technologies that are critical to the federal marketplace’s future.

Executive Mosaic is pleased to recognize LaPlante as a first-time Wash100 winner for the first time in his long and illustrious career in the federal government and sector.

Visit Wash100.com to cast a vote for William LaPlante as one of your TEN votes to advocate for your favorite leaders in the federal and government sectors.

President Biden announced his intent to nominate William LaPlante as the nominee for the under secretary for Acquisition and Sustainment role with DOD back in November 2021. In the official statement following the announcement, the White House commented that:

“Dr. William A. LaPlante is a seasoned national security leader with nearly four decades of experience in acquisition, technology, sustainment and the defense industrial base,” the statement reads. “Dr. LaPlante has spent much of those decades delivering material as well as conceptual innovations to enhance national security capabilities and efficiency.”

Most recently, LaPlante emphasized his belief that the U.S. needs multiple production lines that can manufacture missiles, drones and bombs. He also told lawmakers his intent to expedite deliveries of weapons systems and other equipment to Ukraine in response to Russia’s invasion.

As a part of redesigning U.S. weapon systems, LaPlante advocated for the importance of altering U.S. weapons systems utilizing modular open systems that can be easily upgraded with new technologies.

“We’ve known about modular systems for 20 to 30 years,” LaPlante explained. “We need to get them into all of our new systems and put it in the [request for proposal].

For instance, the B-21 … was designed with an open standard right from the beginning, such that continuous technology could be upgraded for decades to come. That should be in all of our systems.”

In addition, LaPlante also discussed the need for the Pentagon’s acquisition system to deliver new capabilities for our warfighters in order to meet the evolving threats from China, Russia and other key adversaries.

More specifically, LaPlante mentioned emerging technologies such as artificial intelligence, autonomous devices, quantum sensing as well as key energy programs and hypersonic weapons as the most significant advancements that must get into the market and the field for our warfighters as soon as possible.

William LaPlante also mentioned the importance for the Pentagon to lower the barriers that are holding back smaller federal organizations from doing business in the defense and technology sectors.

He expressed the need to help small non-traditional businesses and startup companies with reliable financing and resources as well as working with the broader acquisition community to drive innovation for small businesses.

“We want the widest amount of competition possible,” LaPlante explained. “If in fact there’s a new entrant, small business or a startup, that can do your job, you will be competitive with them, and it’s going to drive better behavior.”

Visit Wash100.com to vote for William LaPlante and who you believe deserves the recognition as the most significant leader to the GovCon community and federal landscape.

Executive Mosaic is proud to recognize William LaPlante for being named a 2022 Wash100 Award recipient. As a first time winner of the most coveted award in GovCon, LaPlante has demonstrated a level of success and recognition that can only be recognized by the Wash100 Award and the GovCon community.