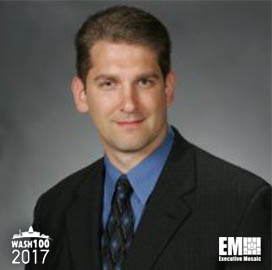 Executive Mosaic is honored to announce Erich Sanchack, senior vice president and general manager of CenturyLink‘s federal business, as an inductee into the 2017 edition of the Wash100 — Executive Mosaic’s annual selection of the most influential voices in the government contracting arena.

Sanchack assumed his current role as head of the telecommunications company’s federal sales efforts in November 2016 with the transition of Tim Meehan into the VP post in charge of managed services sales and support.

He moved to CenturyLink from Lockheed Martin, where he worked for 12 years and most recently served as VP for competitive enhancements.

CenturyLink, which provides communications and data services to government, commercial and residential customers, is in the process of acquiring Level 3 Communications through a potential $34 billion cash-and-stock deal.

The acquisition is anticipated to close by the end of this year and boost their combined network management and security services portfolios.

CenturyLink received a potential seven-year, $26.6 million contract from the U.S. Senate’s sergeant-at-arms office for the deployment of a unified communications-as-a-service platform at more than 450 locations.

The company will also deliver software-defined networking and network functions virtualization services to the Defense Department under a previously awarded contract for the installation of a fiber-optic network.

Executive Mosaic congratulates Erich Sanchack and the CenturyLink team for their selection to receive this award.